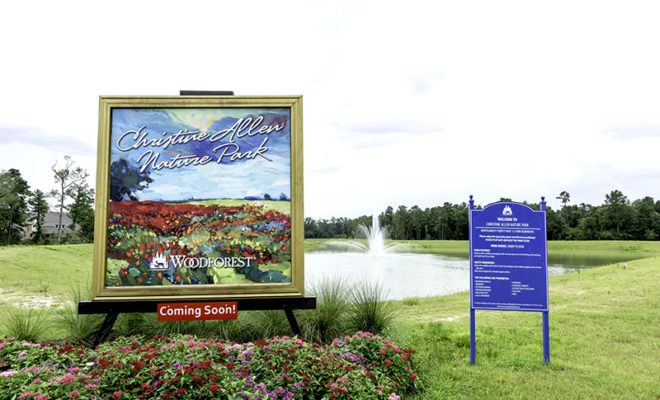 MONTGOMERY, TX – Following the addition of two new parks this year, Woodforest continues to enhance its residential amenities with the completion of the first phase of Christine Allen Nature Park.

The 33-acre park will receive a new entry that opens to a park green with a curb-free drop-off area. Nearby is a restroom building. A paved parking lot will be able to accommodate 30 cars, and two accessible parking spaces are being added. Two overlooks offering views of the park will anchor a pedestrian bridge spanning a detention pond. 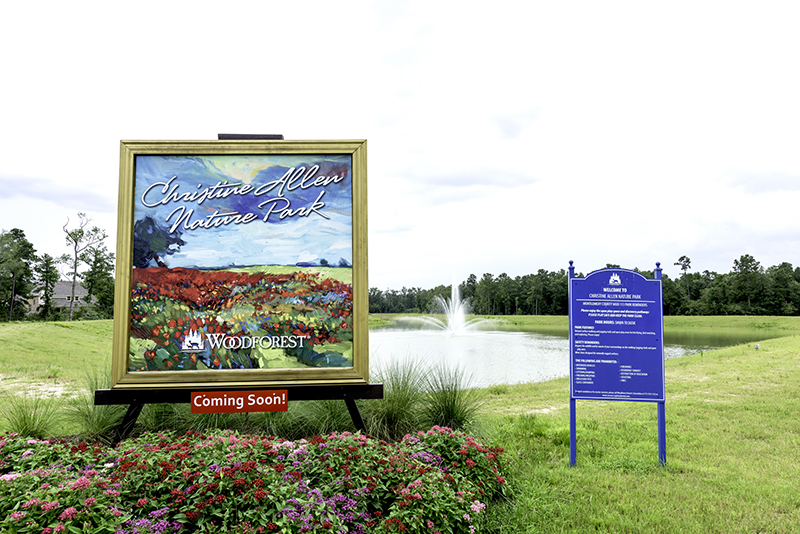 Christine Allen Nature Park in Woodforest is expanding to include parking, restrooms and other features — all in time for the September 22 Woodforest Craft Fest.

“The goal is for Christine Allen Nature Park to be a premier event space that can accommodate large-scale events such as the popular Woodforest Craft Fest, as well as a place where residents can jog, walk or bike and our Director of Fun can host one of her many outside events during the year,” said Virgil Yoakum, Senior Vice President and General Manager of Woodforest.

The park debuted in Woodforest two years ago, and has been used primarily as the event site for the Woodforest Craft Fest, an open-air event combining craft beer samples and live music that drew nearly 2,000 people in its first year in 2016. The phase 1 enhancements will make the park more enticing as an event venue.

Residents also enjoy pools, a spray park, playgrounds, tennis courts, a basketball court, a dog park, trails, the Stampede Sportsplex and proximity to Woodforest Golf Club. The community recently was listed at No. 38 on a mid-year report of the nation’s top-selling master-planned communities compiled by Robert Charles Lesser & Co. Homes in Woodforest are priced from the $180,000s.

Woodforest, a project of Johnson Development Corp., is a 3,000-acre master-planned community surrounding Woodforest Golf Club, one of the top-ranked daily-fee golf courses in the Houston area. The development offers a broad array of housing choices and prices — executive homes, patio, townhomes, and custom homes priced from the $180,000s to the millions — targeted to lifestyle-oriented buyers. Woodforest is slated for more than 5,500 homes and a full complement of amenities, retail and commercial properties. Located north of downtown Houston, Woodforest is five miles north of The Woodlands and six miles south of Conroe. Convenient access just seven miles west of Interstate 45 is provided by Fish Creek Thoroughfare, a major north/south thoroughfare connecting Conroe in Montgomery County and Tomball in Harris County. For more information about Woodforest, visit www.woodforesttx.com.