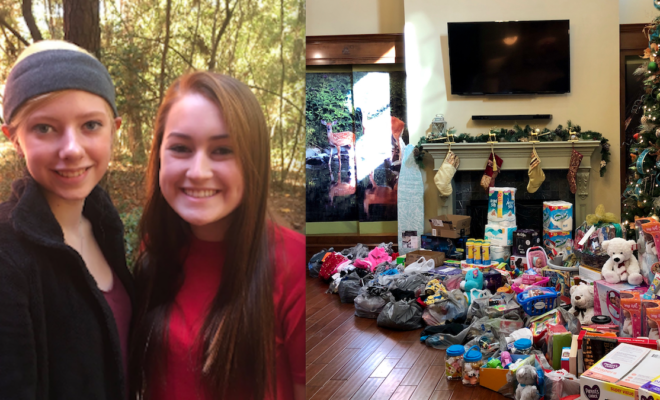 Montgomery, Texas –  A decision by two local teens to enter a Health Occupations Students of America (HOSA) competition has blossomed into something neither girl imagined would happen — more than $4,000 worth of donations for women and children at a local women’s shelter. 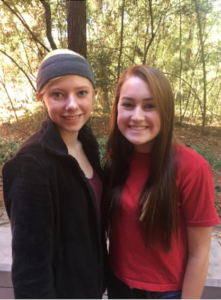 Avery Palacios and Courtney Brumley, sophomores at iSchool High in The Woodlands, chose community awareness for their focus in the HOSA competition. Wanting to do something benefitting women, they directed their focus upon domestic violence and decided to launch a donation drive for the Montgomery County Women’s Center.

“Domestic violence is such a large issue no one ever talks about,” Palacios said. “It’s really important to raise awareness.”

The pair put up donation boxes at the Lone Star College Montgomery campus and partnered with a teacher who gave extra credit to students who brought in items to donate. Brumley and Palacios also contacted several neighborhoods, including Woodforest, where Brumley lives. Woodforest added the women’s center as a beneficiary of its annual holiday drive, which typically benefits Toys for Tots only. And then the Woodforest development team did a little more.

“We partnered with builders and vendors, collecting monetary donations, which we then used to purchase requested items such as diapers, T-shirts, underwear, ironing boards, bottled water and more,” said Terry Reese, Woodforest office manager. “Combined with the items visitors and residents dropped off during our donation weekend, we had more than $4,000 worth of merchandise for the center.”

The girls never thought they would collect this much.

“We really wanted to raise awareness and thought if we collected anything — maybe a couple of boxes — that would be great,” Brumley said. “I didn’t quite believe it when Faith at Woodforest said we would need a truck to pick up everything. When my mom and I went to the Homefinder Lodge and saw how many items there were, we decided we needed two trucks.”

The Montgomery County Women’s Center can house up to 75 women and children each night, providing safe shelter for survivors of family violence, sexual assault and stalking. Other services include a 24-hour hotline, crisis intervention, counseling, advocacy and legal services.

The project has been an eye-opener for both Brumley and Palacios.

“I feel that especially in The Woodlands area, it’s hard to imagine domestic violence happening; we all just live our lives,” she said. “I never even realized that this was going on in our own community. But we need to talk about it so women know where to get help.”

The girls compete in the HOSA event locally January 26 and 27. If they do well, they advance to state competition in April. But while a win would be nice, the competition is no longer a primary motivation.

“This has gone from a competition to something much larger, much more impactful,” Brumley said.

Woodforest is located in South Montgomery County, about seven miles west of Interstate 45 and five miles north of The Woodlands. Learn more about Woodforest at www.woodforesttx.com.