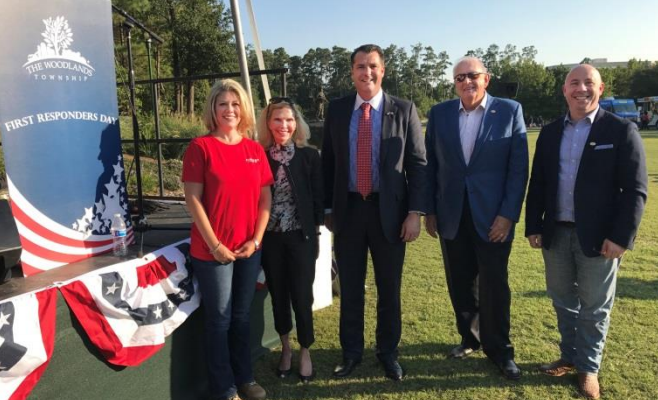 THE WOODLANDS, TEXAS – The Woodlands Township and Board of Directors hosted a special ceremony on September 11, 2017, in Town Green Park, to honor first responders for their service and dedication to the community.

Watch the full ceremony captured by Hello Woodlands in a LIVE Facebook video:

Chairman of the Board Gordy Bunch welcomed the group and offered remarks, thanking the multiple agencies that support and protect the community.

“I want to acknowledge that today is 9/11, and as many are acutely aware, this is the day that our country was attacked by terrorists,” he said. “But it is also the day where our first responders shone the brightest. It is the day when 400 of them sacrificed their lives running into the Towers, into the chaos, in order the save their fellow citizens, neighbors, friends and family. Today’s acknowledgment is to recognize the sacrifices and risks that these first responders take on our behalf on a daily basis. We only have to look back a few weeks ago to Hurricane Harvey, or 15 months ago to the flooding we experienced here, to see how our first responders go out there during a time of need and risk their lives for all of us. Today is just a small way to say thank you for the sacrifices that they make every day.”

After the reading of the Proclamation by Township Director Laura Fillault, Bunch introduced The Woodlands Fire Chief Alan B. Benson, who spoke about the loss of so many first responders during 9/11.

“Of those who perished during the initial attack on the World Trade Center: 23 NYC police officers, 37 port authority officers, and 343 NYC firefighters…all first responders who died in the performance of their duties, never thinking twice about the dangers that were present, just doing their job,” Benson said. “It is humbling. Let us never forget the tragic day of September 11, 2001.”

Following Chief Benson, bagpiper Richard Kean played “Amazing Grace.” Bunch then recognized the Township Board of Directors, Team Rubicon and the Montgomery County Hospital District. He also encouraged residents to support members of The Woodlands Fire Department who lost their homes during Hurricane Harvey, while they were performing high-water rescues within the community.

The ceremony concluded with a 21 Gun Salute by the Montgomery County Sheriff’s Office Honor Guard.

For more information about The Woodlands Township, please visit www.thewoodlandstownship-tx.gov or call 281-210-3800.