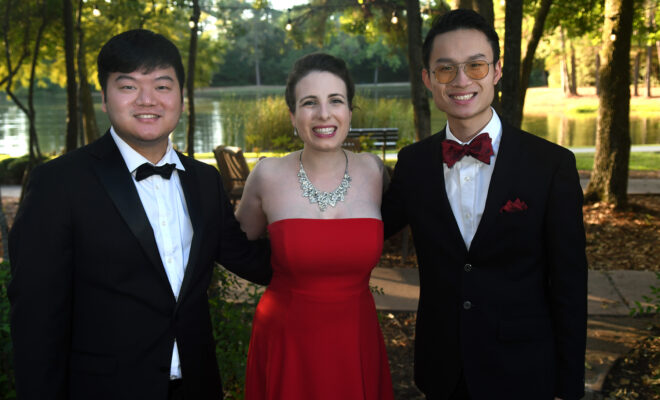 YTA launched its new season during its Classics At The Glade celebration at Glade Cultural Center in The Woodlands. Here’s a closer look:

Annette Hallock, Lana Hazlett and Ken Hallock at Classics At The Glade. Photo by Jerry Baker.

From left to right: Joseph Staley, who curated the contemporary art exhibit by young Texas artists shown in the background, with his mother, Debra Staley, and his father, Gil Staley, master of ceremonies for Classics At The Glade. Photo by Jerry Baker.

Young Texas Artists, founded in 1983, is a one-of-a-kind nonprofit presenter of music competitions and events, career development programs and cultural enrichment outreach. The nationally acclaimed Young Texas Artists Music Competition and the YTA Career Development Program provide professional guidance, mentoring and highly sought performance experience. An Official Music Competition of the State of Texas, it is one of the few competitions in the nation with four performance divisions: Voice; Piano; Strings; and Winds, Brass, Percussion, Harp and Guitar. The YTA contest is open to classical artists, ages 18-30 (20-32 for Voice), who are Texas residents or affiliated with a Texas music school. Over the years, Young Texas Artists has helped produce many distinguished professionals who have gone on to join orchestras, opera companies, universities and music schools around the world. youngtexasartists.org.

Affiliations: Young Texas Artists is a member of the Greater Conroe Arts Alliance, the Conroe/Lake Conroe Chamber of Commerce, the Texas Cultural Trust and Texans for the Arts.