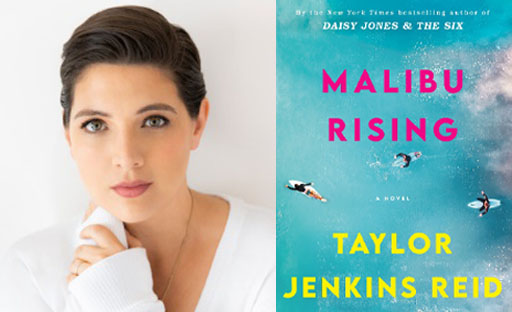 THE WOODLANDS, TX – The John Cooper School Fine Arts Council is very pleased to announce that Taylor Jenkins Reid, the New York Times bestselling novelist of Malibu Rising and Daisy Jones & the Six is the keynote speaker for the 17th Annual Signatures Author Series event to be held on December 3 at The Woodlands Waterway Marriott Hotel and Convention Center.

Reservations are on sale July 1 at www.johncooper.org/signatures for this highly anticipated luncheon event in The Woodlands. Early registration for table sponsorships and individual reservations are recommended for the best seating.

Reid’s newest novel, Malibu Rising, an instant New York Times bestseller follows the four famous Riva siblings who throw an epic party to celebrate the end of the summer. The events of the night in 1983 reveal the many secrets that shaped this family’s generations, and the Riva’s lives change forever. With her beloved, signature style, Reid writes a powerful story of historical fiction that explores fame, family, identity, and the impact of secrets unraveled. Malibu Rising is a #ReadWithJenna book club pick and is set to be adapted as a Hulu television series.

Her previous novel, Daisy Jones & The Six (another New York Times bestseller), details the history of a fictional rock band from the 1970s and what led to their rise to and fall from fame. In addition to writing the novel, Reid also wrote the lyrics for each song featured in the book. Before its publication, the novel was picked up by Reese Witherspoon for her monthly book club, and by Hello Sunshine, Witherspoon’s production company, for an Amazon limited television series starring Riley Keough. Daisy Jones was named one of the best books of 2019 by several media outlets, including NPR, The Washington Post, Esquire, Glamour, Real Simple, Good Housekeeping, Marie Claire, and more. The audiobook has also received critical acclaim and was named one of Apple Books’ Best Audiobooks of 2019.

Reid is also the author of the acclaimed novel, The Seven Husbands of Evelyn Hugo (also a New York Times bestseller), which follows the story of a fictional Hollywood icon and her glamorous life and marriages. A television adaptation of Evelyn Hugo is in the works, with Reid writing the series adaptation. Her other books include One True Loves, Maybe in Another Life, After I Do, and Forever, Interrupted. Reid’s novels have been Indie Next picks and have been featured in People, US Weekly, Entertainment Weekly, Good Morning America, Goodreads, and more. She lives in Los Angeles.

Each year, a portion of the proceeds from the Signatures Author Series is given to a local literary organization. 2020 Signatures Chairs Lisa Hollingsworth and Malin Melin met with Rita Wiltz, Executive Director of Children’s Books on Wheels to present a $1,000 donation. The mission of Children’s Books on Wheels is to promote reading by providing books, educational literature, and community resources to Pre-K through 12th grade students and their families in rural communities and urban cities.