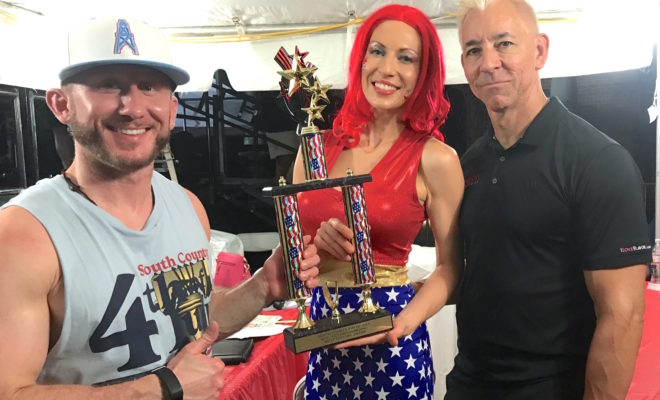 Over 150 floats, 40 dignitaries and 5 high school marching bands participated in the 1.3 mile route of the South County 4th of July Parade in The Woodlands on July 4, 2017.

New awards included the Facebook Fan Favorite and the Best Go Live Entry. The Facebook Fan Favorite was awarded based on photos posted of the Parade Float and parade fans on Facebook, Instagram or Twitter using the tag #TheWoodlands4th. The Best Go Live Entry was judged on the live video broadcast during the walk through the parade route on Facebook or Instagram with the tag #TheWoodlands4th.
Parade Judges included John Powers, Bret Strong, Steven Hummer, Bob Milner, Josh Urban, Ted Oberg, Kim Morgan, Jim Raney, and Kelly Dietrich. The judges’ stand was located on the balcony in Market Street across from Central Park.
The South County Parade Awards were announced at 7 p.m. at Waterway Square Park during the Red, Hot & Blue Festival that hosted activities including face painting, balloon artist, concessions and live music from Level One Band.

View Video and Photos the Parade

A special thank you to Jeremy Hall and the Parade Committee for giving Hello Woodlands the great honor of winning the “Go Live Award” for the best live video broadcast during the parade route!

To learn more about the parade and awards, visit www.4thofjuly.org.