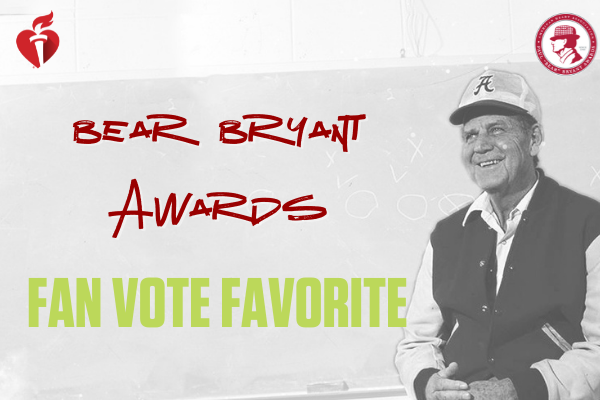 The American Heart Association, the world’s leading nonprofit organization focused on ensuring longer, healthier lives for all, kicks off its 2021 Paul “Bear” Bryant Awards Campaign in honor of the legendary Alabama football coach who died of a heart attack just 28 days after his final victory in the Liberty Bowl and retirement. Now in its 36th year, the campaign has raised millions of dollars funding research, education and advocacy efforts and saving countless lives.

The Paul “Bear” Bryant Awards recognize the country’s top college football coach. The Coach of the Year Award will be presented on January 12, 2022, at the Post Oak Hotel at Uptown Houston, and is the only college coaching honor selected after all bowl games and the national championship conclude.

The Bryant Awards Campaign launches with the second annual fan vote this September, inviting college football fans to cheer their favorite coach to victory. The vote, sponsored by KPMG, runs through January 7th, ending just before the college football national championship game. Passionate fans have the full season to develop a game-winning strategy to recruit their fellow alums and cheer (vote) their coach to victory. The winner of the fan vote will also be announced during the awards ceremony on January 12, 2022.

The American Heart Association is proud to announce Marc Helm, a retired financial services and mortgage banking executive, and Shawn Lafferty, partner and Houston markets leader for KPMG LLP, will serve as co-chairs for the 2021 Paul “Bear” Bryant Awards Campaign. As an Aggie, Marc Helm is rooting for Texas A&M’s Jimbo Fisher while Shawn Lafferty is rooting for Alabama’s Nick Saban, the 2020 Fan Vote winner and winner of the Coach of the Year Award in 2020.

The fan vote is more than just good fun. It allows the American Heart Association to shine a light on heart disease and stroke, the #1 and #5 killers of Americans and reach a younger, more diverse audience with powerful awareness messaging. After years of declining rates of coronary artery disease, research shows the trend is reversing among younger people, especially women and communities of color. By 2035 nearly half of the U.S. population is expected to have some form of heart disease.

“Through sports, we’re able to reach new audiences. We’re meeting people where they are, and this might be the first time they’re hearing a message that resonates with them about heart healthy lifestyles. It’s the same type of lifestyle mentality that athletes follow to stay gameday fit. That’s why KPMG is proud to sponsor the Fan Vote and the Bryant Awards’ community initiative, ‘Bring a Ball to Bear’ that will give our employees the opportunity to donate footballs and other sports equipment to local youth and get them excited about physical activity,” says Lafferty.

The American Heart Association is dedicated to ensuring heart healthy lifestyles are a reality in all communities. Not all people live in a neighborhood with access to healthy foods and safe physical activity, and this directly impacts lifespan and longevity. By collaborating with organizations, locally and nationally, and powered by millions of volunteers, the Association advocates for the public’s health and shares lifesaving resources.

Through sports, the Bryant Awards is making healthy living more accessible to all communities, and is just one way the Association is working to achieve their 2024 Health Equity Impact Goal.

“The Bryant Awards aligns with American Heart Association’s healthy living movement inspiring individuals to create lasting change in their health and life, one small step at a time,” says Helm. “In our world where physical activity is increasingly engineered out of our lives and the default is to sit, we must be relentless in our pursuit to ‘sit less and move more’ throughout the day.”

The American Heart Association is a relentless force for a world of longer, healthier lives. We are dedicated to ensuring equitable health in all communities. Through collaboration with numerous organizations, and powered by millions of volunteers, we fund innovative research, advocate for the public’s health and share lifesaving resources. The Dallas-based organization has been a leading source of health information for nearly a century. Connect with us on heart.org, Facebook, Twitter or by calling 1-800-AHA-USA1.

Marc Helm, retired President and CEO, Reverse Mortgage Solutions, Inc. (RMS) Marc is a 41 year-plus veteran of the financial services and mortgage banking industry. He recently served as President and Chief Executive Officer of Reverse Mortgage Solutions, Inc. (RMS). RMS was, under his tenure, one of the largest Ginnie Mae Securitizers, originators and servicers/subservicers in the reverse mortgage industry.

Shawn W. Lafferty, Partner, KPMG LLP. Shawn joined KPMG in 1996 and serves as the Advisory Leader for the Houston Markets. As a Senior Partner, he brings 30 years of experience in building and operating Advisory businesses, improving the company brand, developing national service sets, building delivery teams, recruiting talent and demonstrating leadership through hands-on client service delivery. He has significant account leadership experience and is recognized by clients for addressing business problems and having an entrepreneurial vision.

Lafferty joined the Paul “Bear” Bryant Awards Executive Leadership Team in 2012 and serves as an active committee member, as well as the Co-Chair for the 2022 Bear Bryant Campaign.

Mr. Lafferty completed his executive education at the University of Pennsylvania, The Wharton School – KPMG Lead Partner Academy in 2007. Also completed his B.B.A. at Texas A&M University, Mays Business School in Management Information Systems “MIS” in 1990. He is currently serving the Mays Business School Department of Accounting Advisory Council since 2011, and he continues to serve the Texas A&M University Association of Former Students’ Leadership Council since 2012.