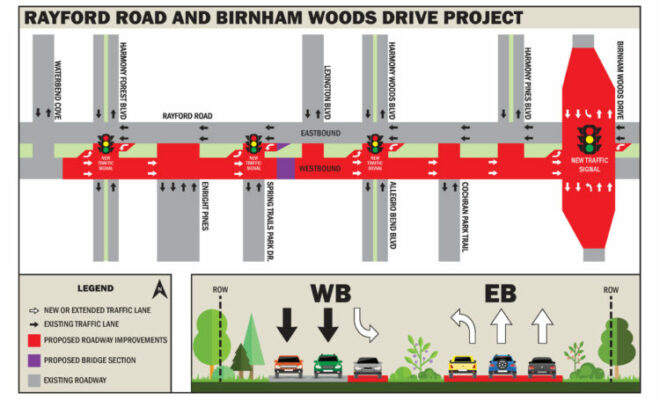 SPRING, TX – The traffic signal lights at the Rayford Road-Spring Trails Park Drive intersection are scheduled to be turned on and operating by Tuesday, February 1.

The Traffic Operations Department is scheduled to start work on the traffic signal poles at the Rayford Road-Birnham Woods Drive intersection this week, weather permitting.

There will be some lane closures and traffic disruptions in that area as the traffic signal work continues.

PROJECT SCOPE: The Rayford Road-Birnham Woods Drive widening and intersection improvement project widened Rayford Road to four lanes from approximately 40 feet east of Waterbend Cove to approximately 400 feet east of Birnham Woods Drive. A new concrete roadway was constructed on the south side of the existing Rayford Road lanes to create the two new eastbound lanes. The existing road now makes up the two westbound lanes along that stretch. Left-turn lanes also were added for eastbound and westbound traffic at most intersections.

Traffic signals are replacing all-way stops at these intersections:

Pedestrian signal poles and crosswalks have been included as part of the intersection signalization.

All lanes also have opened along the Kuykendahl Road widening project between Lake Woodlands Drive and Bay Branch Drive.

The crossovers still are closed and there will be intermittent lane closures as final work and cleanup is completed.

PROJECT SCOPE: The project widened Kuykendahl Road along an approximately 1.5-mile stretch, expanding a two-lane half boulevard to a four-lane full boulevard from north of Lake Woodlands Drive to south of Bay Branch Drive.

Project design included construction of two 12-foot-wide northbound vehicle lanes from north of Lake Woodlands Drive to south of Bay Branch Drive with an 8-foot-wide outside shoulder along the new northbound lanes. A new bridge was constructed over Bear Branch for the northbound lanes that has a walkway, mirroring the existing bridge.

The two existing lanes are now the southbound lanes.