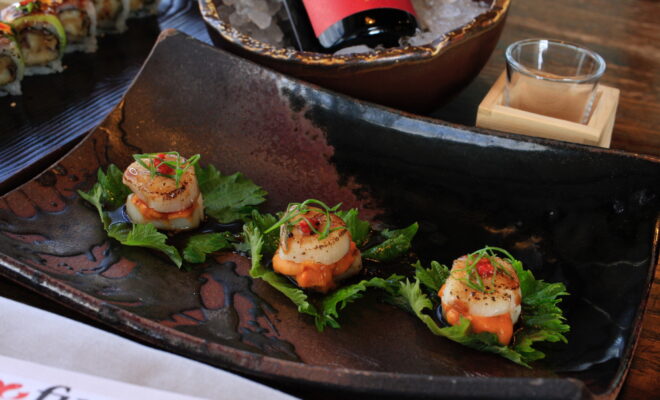 Blōōfin Sushi Restaurant to Open at Hughes Landing® in The Woodlands®

THE WOODLANDS, TX – The Howard Hughes Corporation® (NYSE: HHC) announces that Blōōfin will open the second location of its contemporary Edomae-inspired sushi restaurant in late spring of 2023 at Hughes Landing®, the 79-acre walkable urban destination in The Woodlands®.

In its original translation of Edomae, “Edo” means the old name for Tokyo, and “Mae” means front, referring to the fish caught in Tokyo Bay. Today, Edomae refers to the traditional Tokyo method of preparing sushi with local fresh fish, according to Owner and Restaurateur, Laurence Ho.

Blōōfin will offer fresh fish imported daily from the Toyosu market of Tokyo, as well as other parts of the world, for lunch and dinner, along with a specially curated selection of Japanese whisky, sake and craft cocktails. Traditional to Japanese cuisine, Blōōfin uses local and seasonal ingredients for their menu offerings and will source seasonal ingredients from the state of Texas as well as the Toyosu market in respect for its time-honored Japanese preparation.

“We believe The Woodlands has an unspoken demand for a high-quality sushi restaurant, and our new location in Hughes Landing will provide a unique dining experience for the community,” said Ho, who also owns the original Blōōfin restaurant in Spring, Texas. “Given its vibrant community, beautiful landscape, and strong economy, it is no surprise that The Woodlands is voted the best community to live in America, which makes it the perfect spot to open our second Blōōfin location.”

With the announcement of Blōōfin, Restaurant Row in Hughes Landing is 100% leased, offering a variety of food from Americana, Brazilian, Italian, Mexican to seafood and steak. In addition to Restaurant Row, Hughes Landing offers direct access to many other amenities including specialty shops, water sports on 200-acre Lake Woodlands, Embassy Suites by Hilton, luxury multifamily residences, Class-A office space, and access to hike-and-bike trails.

“Hughes Landing is a popular destination boasting a walkable, natural setting overlooking Lake Woodlands, and Blōōfin will be a welcome addition to the appealing selection of dining establishments with patio views along Restaurant Row,” added Marissa Moreau, Manager of Leasing for The Howard Hughes Corporation.

The Woodlands, a 28,500-acre award-winning master planned community located 27 miles north of downtown Houston, was recognized two consecutive years, 2022 and 2021, as the #1 Best Community to Live in America by Niche. The Woodlands, and its sister community Bridgeland, are the first master planned communities (MPC) in Texas to have earned the LEED® precertification by the U.S. Green Building Council, and The Woodlands is the largest MPC in the world to earn the status. The Woodlands offers an unprecedented 28% of green space, leading the way among master planned communities that practice environmental preservation. It is home to 120,000 people, and nearly 64,000 people work in the community. The Woodlands has received numerous past accolades including the Vision Award, Development of Distinction from the Urban Land Institute; three-time honoree of “Master Planned Community of the Year,” four-time recipient of “Humanitarian of the Year” and “Trailblazer of the Year” in 2018 by the Greater Houston Builders Association; American Trails Developer Award; Environmental Planning Award from the American Society of Landscape Architects, Texas Chapter Houston Section. The Woodlands is a community of The Howard Hughes Corporation®, which supports over 180 local causes in the Houston region through its HHCares program. For more information, visit www.thewoodlands.com. For additional details, find us on Facebook, Twitter, and Instagram.

The Howard Hughes Corporation owns, manages and develops commercial, residential and mixed-use real estate throughout the U.S. Its award-winning assets include the country’s preeminent portfolio of master planned cities and communities, as well as operating properties and development opportunities including: the Seaport in New York City; Downtown Columbia®, Maryland; The Woodlands®, Bridgeland® and The Woodlands Hills® in the Greater Houston, Texas area; Summerlin®, Las Vegas; Ward Village® in Honolulu, Hawai‘i; and Teravalis™ in the Greater Phoenix, Arizona area. The Howard Hughes Corporation’s portfolio is strategically positioned to meet and accelerate development based on market demand, resulting in one of the strongest real estate platforms in the country. Dedicated to innovative place making, the company is recognized for its ongoing commitment to design excellence and to the cultural life of its communities. The Howard Hughes Corporation is traded on the New York Stock Exchange as HHC.

Related Itemshoward hughes corporationhughes landingnew restaurantrestaurant
← Previous Story Fundraising Breakfast for Children’s Safe Harbor to be Hosted by Pct. 3 Constable Ryan Gable at Truluck’s on Dec. 6.
Next Story → Experience the Sounds of the Season at Holly Jolly Jingle December 1 at The Pavilion