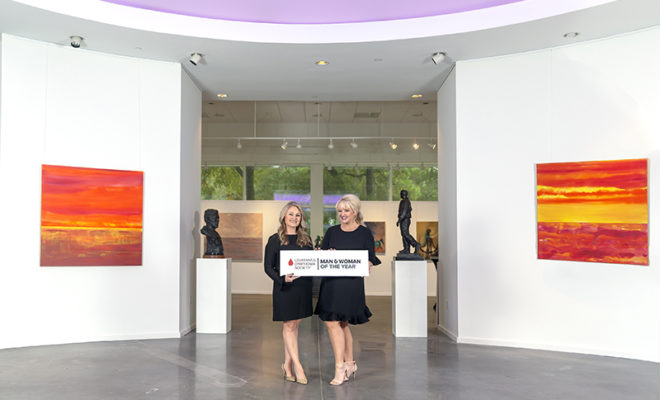 THE WOODLANDS, TX – After raising a combined total of $116,000 for blood cancer research in Montgomery County’s inaugural Man & Woman of the Year competition, two local women have been selected to chair the 2019 event, which kicks off March 7 and culminates with a gala May 17 at The Woodlands Resort.

Kalli Gonzalez, branch manager and sales executive at Fidelity National Title in The Woodlands, and Stacey Robertson, a Realtor and CPA who is affiliated with Blake Wilcox Properties and Zions Bancorporation, will co-chair the 10-week fund drive for the Leukemia and Lymphoma Society (LLS). 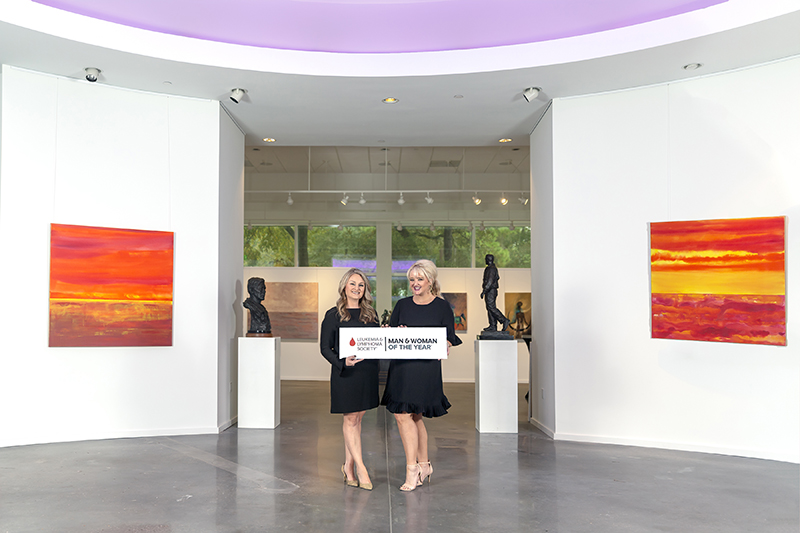 Stacey Robertson and Kalli Gonzalez met up at the Glade Cultural Center in The Woodlands to discuss their plans of continued fundraising efforts for the Leukemia and Lymphoma Society as chairs of the 2019 Montgomery County Man & Woman of the Year competition. Photo by JDHallett Photography.

The Man & Woman of the Year competition pits local candidates against one another in a light-hearted popularity contest with a serious purpose. Every dollar raised by the candidate and his or her team members for the LLS counts as one vote, and the candidate with the most money at the end of the campaign is named the Man or Woman of the Year.

Fifteen candidates will vie for the 2019 title. Their names have yet to be announced.

Gonzalez was a 2018 candidate who assembled a 24-person team. She finished second in the competition behind Woman of the Year Erin Cones, whose 5-year-old son is completing treatment for acute lymphoblastic leukemia. Robertson was the captain and top-producing member of Gonzalezs fundraising squad and was named Team Member of the Year.

LLS Man & Woman of the Year events began nationally 25 years ago. In Houston, the competition has been going on for eight years.  According to Mindy Reynolds, LLS Montgomery County campaign manager, as more blood cancer treatment facilities open in what is becoming a mini-Med Center in The Woodlands, it made sense to expand the contest to the area. The LLS Light the Night Walk, which increases awareness of blood cancers while also raising funds, was already established and well-known in the county and the Man & Woman of the Year competition builds upon its success.

As for Gonzalez and Robertson, who incidentally have been best friends since the first grade, are described by Reynolds as competitive leaders who did not hesitate to say yes to becoming chairs.

“Most candidates have never done fundraising at this level, but both Kalli and Stacey brought in incredible numbers,” Reynolds said. “I know their mission is to exceed the 2018 mark.”

Gonzalez said helping to shape the 2019 competition is a perfect encore to her run as a candidate.

”It was such a fun-filled and competitive 10 weeks, I wasn’t really ready for it to be over,” she said. ”As a chair, I’m no longer working toward my own personal fundraising goal. Together we are all working to cure cancer and that is a powerful mission of which I am proud and honored to be a part.”

Robertson said the campaign is a smart and strategic way for LLS to increase knowledge about blood cancers and the needs of patients and families.

”Lots of people haven’t had exposure to the work of the LLS,” she said. ”The potential to fund a cure is very real.”

LLS is indeed making great strides in that direction, Reynolds said. In 2017, for example, the Federal Drug Administration approved a record 18 treatments for blood cancer, and 15 of them were funded by LLS.

But research is just one facet of the LLS’ work. The organization provides financial and emotional support to families, helping with co-pays, medications and, in the case of Harvey victims, getting patients back into their homes.

Robertson said she’s counting on the gracious and giving people of Montgomery County to step up for LLS patients.

”I feel blessed to not have been impacted by blood cancer so I want to help those who have been,” she said. ”Those of us in a position to do for others what they cant do for themselves, really should.”

The Leukemia & Lymphoma Society (LLS) is the world’s largest voluntary health agency dedicated to blood cancer. The LLS mission: Cure leukemia, lymphoma, Hodgkin’s disease and myeloma, and improve the quality of life of patients and their families. LLS funds lifesaving blood cancer research around the world, provides free information and support services, and is the voice for all blood cancer patients seeking access to quality, affordable, coordinated care. To learn more, visit LLS.org.