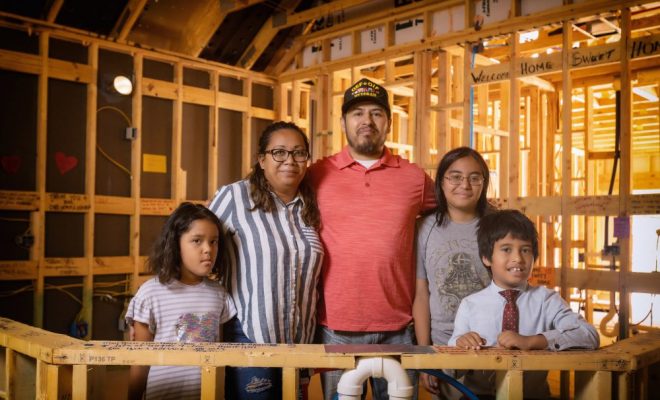 CONROE, TX – The local community gathered Tuesday (June 11) at the homesite of U.S. Army Sergeant Roland Sengstock to write inspirational words of support and encouragement on the studs of his unfinished home in The Woodlands Hills. Operation FINALLY HOME along with Century Communities, The Howard Hughes Corporation, Greater Houston Builders Association (GHBA) and the Houston Texans have partnered to build the mortgage-free home for the military veteran and his family. Roland and his family were on hand to read the Notes of Love left by their new community.

The Sengstocks were surprised with the news they were receiving a mortgage-free home during “The Last Fan Standing” contest at a Houston Texans game last December. Ultimately, Roland’s seat number was selected, and he was invited to the field to reveal his prize – a custom-built, mortgage-free home from Operation FINALLY HOME (see video here). Supporters gathered to break ground on the home in March. Tuesday, with the studs of the home in place, the community wrote notes of support for Roland and his family. The messages will remain as drywall is installed, so the family will feel the support of their community each time they enter their home.

“We’re humbled and honored to partner with so many supporters to build this home for the Sengstock family,” said Heath Melton, Senior Vice-President, MPC Residential with The Howard Hughes Corporation. “Roland is a true representation of patriotism and selflessness, and we’re ecstatic to welcome him to The Woodlands Hills, our newest community.”

While deployed to Iraq, Roland took on Quick Reaction Force (QRF) duties. His unit became the most movable unit in a warzone since the Vietnam war, and he spent his deployment searching Iraq in pursuit of combat. He experienced trauma when a 500-pound bomb knocked him unconscious and a helicopter crashed in a nearby camp. Roland was redeployed in 2007 to Kunar Province in Afghanistan, stationed in “the worst place on earth,” coined by TIME Magazine for its notoriety as “IED Road.” During this deployment, Roland experienced countless firefights and gruesome missions resulting in combat stress.

“Roland’s service to our country is a humbling reminder of the sacrifices men and women continue to make to protect our freedoms,” said Rusty Carroll, Operation FINALLY HOME Executive Director. “We’re honored to provide a small thank you for the Sengstock family for their sacrifice.”

When the home is completed, a dedication ceremony will be held for the family to receive their keys and view their completed home for the first time.

U.S. Army SGT Roland Sengstock spent his early years in Wisconsin and then moved to a Native American reservation in Arizona and attended multiple schools. Following high school graduation, he earned his electrical wire diploma and then entered the military based in Fort Benning, Georgia in 2002.

Following basic training, Sengstock moved to the main base in Oahu, Hawaii, and within a year, was deployed to Iraq, where he took on Quick Reaction Force (QRF) duties. His unit became the most movable unit in a warzone since the Vietnam war, and he spent his deployment searching Iraq in pursuit of combat. He experienced trauma when a 500-pound bomb knocked him unconscious and a helicopter crashed in a nearby camp. Sengstock was redeployed in 2007 to Kunar Province in Afghanistan, stationed in “the worst place on earth,” coined by TIME Magazine for its notoriety as “IED Road.” During this deployment, Sengstock experienced countless firefights and gruesome missions resulting in combat stress.

After eight years of service, Sengstock was honorably discharged and resides in Mesa, Arizona. He works as a Security Guard Officer and helps veterans from all wars at the Mesa Vet Center. In addition, Sengstock gained an associate degree from Mesa Community College and is pursuing a Computer Science Degree.

When stationed in Hawaii, he met and married his wife, Anne, who helped him transition to civilian life. Together, they have three children, and they are looking forward to being closer to family in Houston, Texas.

Century Communities, Inc. is one of the nation’s largest U.S. homebuilders, engaged in all aspects of homebuilding, including the acquisition, entitlement and development of land and the construction, marketing and sale of quality homes designed to appeal to a wide range of homebuyers. The Colorado-based Company operates in 10 states across the West, Mountain, Texas and Southeast Regions and offers title and lending services in select markets through its Parkway Title and Inspire Home Loan subsidiaries. To learn more about Century Communities please visit www.centurycommunities.com.

The Howard Hughes Corporation owns, manages and develops commercial, residential and mixed-use real estate throughout the U.S. Its award-winning assets include the country’s preeminent portfolio of master planned communities, as well as operating properties and development opportunities including: The Seaport District NYC in New York; Columbia, Maryland; The Woodlands, The Woodlands Hills, and Bridgeland in the Greater Houston, Texas area; Summerlin, Las Vegas; and Ward Village in Honolulu, Hawaiʻi. The Howard Hughes Corporation’s portfolio is strategically positioned to meet and accelerate development based on market demand, resulting in one of the strongest real estate platforms in the country. Dedicated to innovative placemaking, the company is recognized for its ongoing commitment to design excellence and to the cultural life of its communities. For additional information about HHC, visit www.howardhughes.com.

The Houston Texans were inducted the NFL’s 32nd franchise on Oct. 6, 1999 thanks to a city-wide effort spearheaded by franchise founder and late owner Robert C. McNair and current Co-Founder and Senior Chair Janice McNair. The Texans have since evolved into Forbes Magazine’s 19th-most valuable professional sports franchise in the world with an estimated value of $2.8 billion and are annually among the Houston Chronicle’s Top 100 places to work in the city. The Houston Texans are the only expansion team to have won its first game, defeating Dallas 19-10 on Sept. 8, 2002 and have sold out every preseason, regular season and postseason game in franchise history, donated more than $30 million back to the community through the Houston Texans Foundation and won AFC South division titles in 2011, 2012, 2015 and 2016. NRG Stadium, the NFL’s first retractable-roof stadium, is the home of the Texans.

The Greater Houston Builders Association, chartered in 1941, is a trade organization whose members are involved in the development, homebuilding and remodeling industries in 11 counties in the Houston area. The association currently has over 1700-member companies, is the 4th largest builders association in the country and the largest in Texas. GHBA is the voice of Houston’s residential construction industry, serving their members and the community through education and advocating professionalism and quality housing. The association also interacts with the government, community and general public to enhance the business climate for its members and to provide quality obtainable housing to the community it serves. The association is also active in community outreach and charitable events.