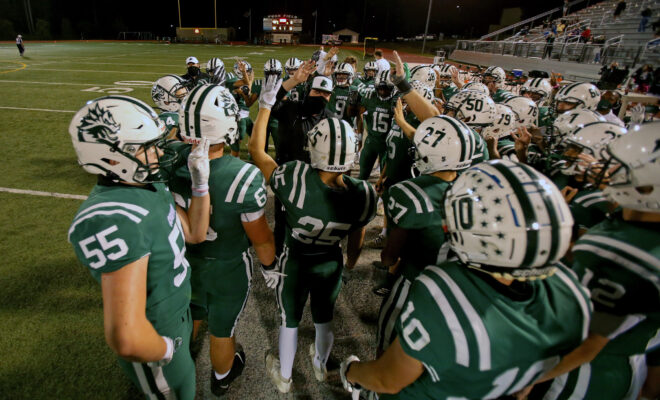 THE WOODLANDS, TX – The John Cooper School’s Dragon athletics roundup this week includes another win for the football team and cross country and volleyball updates.

VARSITY FOOTBALL: Dragons Are 4-0 For Season

On October 23, The John Cooper School defeated Bay Area Christian with a 55-0 win. “The John Cooper School Dragons improved to 4-0 Friday night with a win over Bay Area Christian by a score of 55-0,” said Coach Erik DeHaven. “The Dragons had eight possessions on offense and scored eight touchdowns, only facing four third downs all night. The Dragons running back trio of senior Ben DeLoit, senior Jake Peterson and junior Jaxson Pierce spread the wealth, each rushing for two touchdowns averaging over 15 yards a carry as a group. Senior QB Kaedyn Sullivan added two more touchdowns on 18 of 24 passing for 267 yards.”

“The Dragon defense was its usual self, shutting out yet another opponent, allowing now just 16 points in their four games,” continued DeHaven. “The Dragons were ready for the unique Bronco offense, playing assignment football limiting the Broncos to only one trip into Dragon territory. Peterson led the way, again, with 10 solo tackles and one forced fumble; he was helped by Jr. LB Blake Pitts who tallied seven tackles on the night. The Dragons will look to continue the work as they move on to face Beaumont Kelly High School Friday, October 30 on Pugh Field.”

Players of the Week:

Cooper Cross Country teams participated in a dual meet with St. Johns at Burroughs Park on Saturday. The two evenly-matched teams went head to head in preparation for their final meeting of the year on November 7 where the Houston Area SPC teams will run their season finals. This week’s course at Burroughs, primarily on flat grounds, provided several personal records (PRs) for both teams. The boys’ team out-scored St. John’s by only nine points while the girls’ team was edged out by 25 points.

“We are so proud of Katie,” Dohner said. “She has worked so hard to break 20 and ran really hard today.” Drake was edged out by only six-tenths of a second in a great battle with St John’s runner Cici Calhoun. Chloe Smith ran her best time of the season at 20:59 to finish in 9th place. Freshman Ava Perugini knocked 25 seconds off her personal best finishing 10th place to finish at 21:20. Rebecca Melin and Abby Mendenhall rounded out Cooper’s top five in 14th and 15th place, both posting their season best times.

Cooper will finish up their season on November 7 at Spring Creek Park for the Houston Area Prep School XC Championship meet.