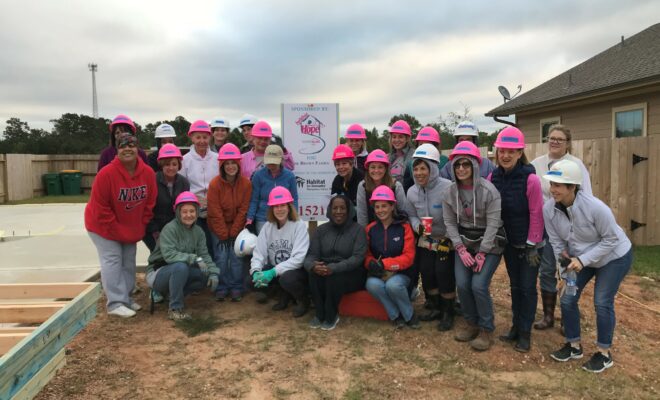 CONROE, TX –  Habitat for Humanity of Montgomery County and Lowe’s are partnering to raise awareness of the global need for safe and affordable housing for women during International Women Build Week (March 8-15). On International Women’s Day, Habitat and Lowe’s will kick off more than 300 Women Build projects supporting women-led households across the United States, Canada, and India to drive awareness and address the need.

“We are so excited about our partnership with Lowe’s and this program to engage and support women,” said Vicki Johnson, Executive Director, Habitat for Humanity Montgomery County, Texas. “This initiative addresses the critical need to raise awareness about the disparities that so many women face as it pertains to employment, pay equity, economic security, and housing affordability. We will join forces with women across the world to being attention to this important cause.”

“Last year Habitat MCTX became an official Women Build with Habitat International,” stated Johnson. “However, long before this was official a dedicated group of women from our community, called the Can Do Crew, understood the need and were raising funds to build homes in our 37 acre Cedar Creek community in Conroe.”

Johnson continued. “Saturdays you would see a group of women in pink hard hats using nail guns, raising walls, and on rooftops all for a future homeowner. We invite women from our community to join their efforts to frame the future and empower women.”

Despite the unprecedented challenges women are facing, women remain on the frontlines of the pandemic as essential workers, as caretakers within their households, and often have to make the difficult decision between maintaining a place to call home and paying for food, health care, childcare, education or reliable transportation. Harvard University’s State of the Nation’s Housing 2020 report revealed that 37.1 million U.S. households spent more than 30 percent of their incomes on housing in 2019, including 17.6 million spending more than 50 percent. The effects of the pandemic have further highlighted the need for safe and affordable housing, as 29 percent of renters and 36 percent of homeowners experienced employment income loss between March and September of 2020.

Hear one story from a Women Build homeowner:

Deanna is a single mom to a sweet son named Preston. Although currently employed as a receptionist she would love to work one day in ministry and possibly go on an international mission trip. As a musician she would enjoy participating in worship and praise with other cultures. Deanna also enjoys writing poetry, playing the piano, and attending theatre performances with Preston in Conroe.

Deanna knows that taking the leap toward home ownership is a choice that will ultimately affect both her life and her son’s life. Struggles that she has faced as a single mom during a global pandemic has assisted her in building her self-confidence and knowledge that she will always have a place to “call home” as a homeowner. Preston does not know yet that his mom is building their new home. On March 13th, the surprise will be revealed!

This story is not unique. Every day, millions of women face the challenge of a future without adequate, stable housing. This issue underscores the importance of Habitat and Lowe’s efforts to bring awareness to the issue, as well as a partnership focused on ensuring that more women have access to affordable housing.

Lowe’s and Habitat’s partnership began in 2003. To date, the program has brought together more than 143,000 women volunteers who have built or repaired nearly 6,000 houses. Lowe’s has committed more than $78 million to support the global housing nonprofit’s efforts, including the Women Build program, International Women Build Week, and Habitat’s Neighborhood Revitalization program. Lowe’s support of Habitat has helped more than 18,000 Habitat partner families improve their living conditions.

To learn more or join the conversation, visit www.habitat.org/womenbuild or follow #BuildHer and #WomenBuild on social media to share and view stories from around the world.

Since 1989, Habitat for Humanity of Montgomery County, TX has worked with the loving hands of volunteers and donors to improve the lives of families and individuals through affordable homeownership. Habitat MCTX volunteers build strength, stability, and self-reliance through shelter. Through community support build the hope of home ownership becomes a reality. Habitat MCTX is 100% self-funded and dependent on the unwavering support of the community.

Learn more about Habitat’s homeownership program and many other initiatives including the Women Build, Home Repair Program, Veteran Build and upcoming events by visiting the website at www.habitatmctx.org or the Facebook page at www.facebook.com/HabitatMCTX.

As a FORTUNE® 50 home improvement company, Lowe’s is committed to creating safe, affordable housing and helping to develop the next generation of skilled trade experts through nonprofit partnerships. Across every community we serve, Lowe’s associates donate their time and expertise through the Lowe’s Heroes volunteer program. For the latest news, visit Newsroom.Lowes.com or follow @LowesMedia on Twitter.