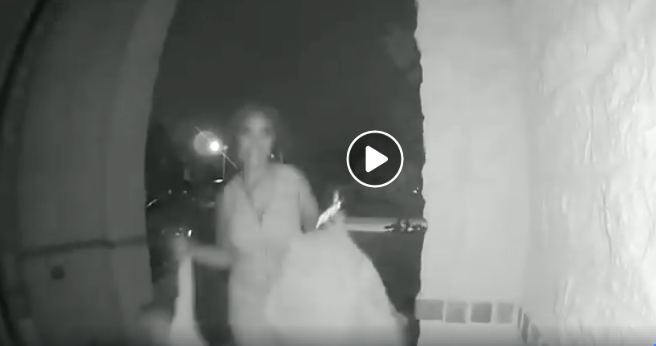 ORIGINAL STORY 10/18/18 6AM: On October 17, 2018, at about 8:20 pm, Deputies with the Montgomery County Sheriff’s Office were dispatched a residence in the 30700 block of Legends Ridge Drive, Spring, Texas in reference to a located person. The 911 caller advised that she heard a knock at her door and when she went to answer the door she found a 2 year old black male child standing at her door with no adult.

When Deputies arrived they viewed video surveillance and observed a black female arrive at the residence in a white passenger car. The suspect is observed running toward the front door of the residence while lifting the child in the air by one arm. Once the suspect arrives at the front door she rings the door bell, knocks on the door and then flees back to her vehicle abandoning the 2 year child and two bags she was carrying. The entire incident lasted 23 seconds.

The suspect appears to be in her mid-20’s to early 30’s with long hair reaching below her waist. Suspect also has multiple tattoos on her right arm that can be seen in the video.

At this point the identity of the suspect and the child are unknown. The child is uninjured and appears to be in good health. Child Protective Services responded to the scene and took custody of the child and are assisting in identifying the child’s family.

UPDATE 10/18/18 9:20AM: “With the help of our local media and our community, the father of the abandoned child has been located. PIO in route to Legends Ridge Drive to provide more details.” – Montgomery County Sheriff’s Office

UPDATE 10/18/18 11:30AM via Montgomery County Sheriff’s Office press conference:
– Father of the abandoned child has been located.
– Female’s identity not being released (at this time) who left the child, but was a family friend.
– Mother was currently in hospital during the incident and was released from the hospital this morning.
– Investigation is ongoing.
Advertisement

UPDATE 10/18/18 4:51 PM: October 17, 2018, The Montgomery Sheriff’s Office received a 911 call from a residence on Legends Ridge Drive, Spring, TX in reference to a 2 year old male child being abandoned at the caller’s residence. The caller advised that she heard her doorbell and a knock at the door. When she opened the door, she found a two-year-old child alone on her doorstep.

When Deputies from the Sheriff’s Office arrived, they reviewed video surveillance from the residence, and observed a female arrive at the residence in a white passenger car. The suspect in the video was observed running toward the front door of the residence while lifting the child in the air by one arm. Once the suspect arrived at the front door she rang the doorbell, knocked on the door, then fled back to her vehicle leaving the two-year-old child alone. The entire incident was captured on video surveillance and lasted 23 seconds.

Deputies canvassed the area in an attempt to find anyone who knew the child but were unable to locate anyone. At that time child protective services were contacted, and the child was released to their custody.

On the morning of October 18, 2018, the father was leaving his residence when he was approached by our media partners asking if he knew anything about the child. At that time, the father was shown the video and immediately identified the child as his son.

The suspect in the video dropped the child off after the father had left his residence and at the wrong residence. The female in the video then left location without verifying anyone was home or who she was releasing the child too.

The investigation is ongoing. Once completed the case will be submitted to the Montgomery County District Attorney’s Office for review.

A street video of the suspect dropping off the child can be found here.