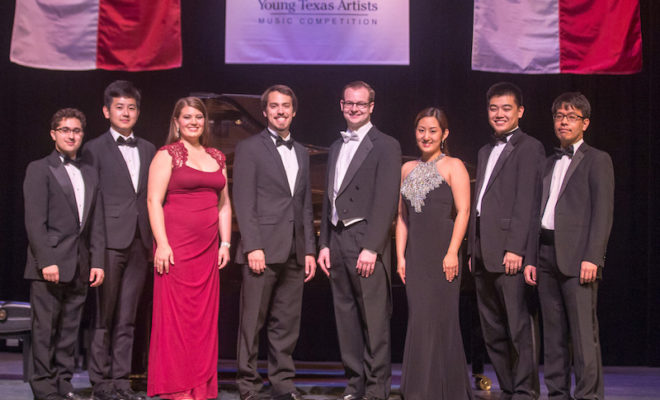 CONROE, TX –  Judges for the 34th Annual Young Texas Artists Music Competition this year include internationally acclaimed performing artists, faculty representing some of the finest music colleges in the country, and respected writers and consultants.

”We’re thrilled to be able to announce such a knowledgeable, highly qualified panel of judges,” said Emelyne Bingham, artistic director of Young Texas Artists Music Competition (YTA). ”Our judges do more than select competition winners: They also provide written critiques for the contestants. I’m certain that the experiences and insights that our 2018 judges bring to the table will be immensely valuable to the performing artists who are still in the early stages of building a career.”

”Once again, Emelyne Bingham has put together a stellar lineup of judges for our competition,” said Susie Pokorski, president of Young Texas Artists, Inc. ”We look forward to welcoming them to Texas and to YTA.”

The Young Texas Artists Music Competition is dedicated to celebrating and supporting the Lone Star States new generation of classical musicians and inspiring their audiences.

The competition features musicians between the ages of 18 and 30 who are Texas residents or students enrolled in a Texas college, university or music school. The musicians compete in their choice of four divisions: Voice; Piano; Strings; or Winds, Brass, Percussion, Harp and Guitar. Musicians also vie for Grand Prize and Audience Choice awards. Competition winners receive professional performance opportunities and share $20,000 in monetary prizes.

The three-day competition culminates with the annual Bach, Beethoven & Barbecue gala and the Finalists’ Concert and Awards on Saturday evening, March 10. To purchase tickets to the gala and concert, visit crightontheatre.org or call the CrightonTheatre box office at 936-441-SHOW (7469). To download and print a reservation card for the gala, visit ytamc.com/bach-beethoven-barbecue.

The Young Texas Artists Music Competition is a member of the Greater Conroe Arts Alliance. Learn more at greaterconroeartsalliance.com.