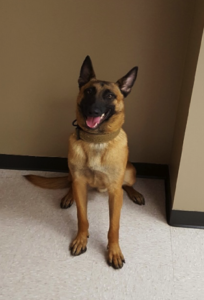 On January 26, 2017 Deputy K-9 Kaution and his partner hit the streets. Approximately an hour after starting their first shift The Montgomery County Precinct 5 Constables deputies stopped a vehicle on traffic in the Hazy Hollow subdivision of Magnolia. The deputies on scene called for a K-9 and Deputy Williams and K-9 Kaution responded to the scene. The K-9 signaled a positive alert to the vehicle indicating the presence of narcotics in the vehicle. Upon a further search of the vehicle deputies located over 2.5 grams of Methamphetamines, along with several prescription pills and some marijuana.

Welcome to the team Kaution!