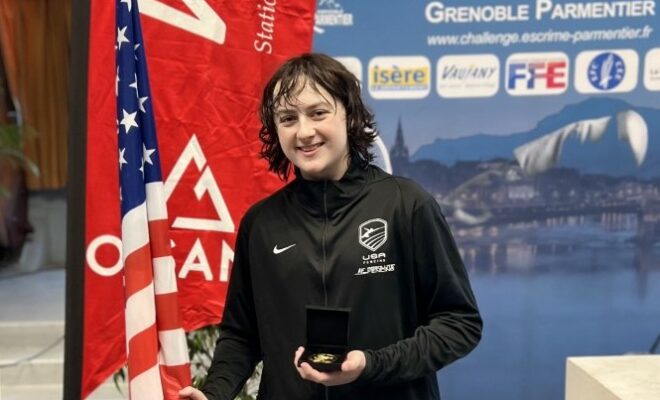 The US Team was the underdog going into the competition. Ranked 19th (out of 28) at the beginning of the tournament, Lioznyansky’s team faced the Italian Team in the Finals, which was currently ranked #1 in the world. Says Lioznyansky, “Going into the finals, the team was excited. We didn’t think we would make it past the first DE [Direct Elimination]….And now we were facing the Italian team that already beat the best American team and the best French team. We didn’t have high hopes – We just knew we would give it our all.” Lioznyansky said one of his favorite parts in the competition “was scoring that last touch in the finals, winning 45-43 against Italy…. I felt like I was finally able to breathe!”

Lioznyansky’s advice to other competitors is “set a goal that’s really high, aim to achieve it, and you’ll end up surprising yourself with how well you do.” What else did he learn? “If you enjoy yourself while fencing, you’ll end up doing better. I was having a good time with the team, and because we were having a blast, we were more relaxed and fenced better.”

Lioznyansky has been fencing for 10 years, starting at age 5. Besides fencing, Lioznyansky is an award-winning film actor and released a singing album in October under his stage name Simon Val.

Fellow Woodlands fencer Felicity Sebastian took 9th place among 174 competitors representing 15 nations in the Women’s Epée Individual competition at the same event. Felicity Sebastian has fenced for 10 years. She is also an accomplished pianist and Eagle Scout. A Junior at The John Cooper School in The Woodlands, Sebastian excels at school as well, filling her schedule with multiple AP classes.

Both Sebastian and Lioznyansky fence at Alliance Fencing Academy, one of the largest epée fencing clubs in the United States.

Only the top 20 fencers in the country are selected to represent the United States on Team USA’s International Cadet (under 17 years old) Team. The selection is based on USFA (United States Fencing Association) rolling-point standings accrued from USFA-sanctioned events. The USFA is the governing body for fencing in the United States. In team fencing events, a team is comprised of three fencers which fence each of the other team’s members for a total of 9 bouts. Each bout builds on the previous bout’s score with a maximum final score of 45.

Alliance Fencing Academy started 18 years ago with less than 10 members. Now the club has grown to more than 250 members with two locations in Houston and The Woodlands.