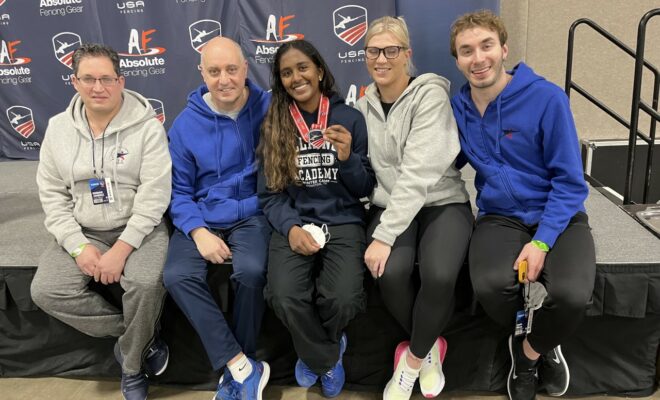 THE WOODLANDS, TX – Local Woodlands high school students Felicity Sebastian and Simon Lioznyansky both secured places on the United States’ International Cadet Fencing Team with their fencing successes this past weekend. Both teenagers finished top 15 in their respective events at the North America Cup (NAC) Fencing competition in Minneapolis, Minnesota on October 7-10, 2022.

Only the top 20 fencers are selected to represent the United States on The International Cadet Team. The selection is based on USFA rolling-point standings. Both fencers have secured their position to fence for the United States on the European Cadet Circuit starting with the competition in Grenoble, France on November 12-13, 2022. Felicity Sebastian will also fence at the next competition in Belgrade, Serbia on October 22-23, 2022. Fencers compete in team events as well as individual events.

The day before the October NAC, Simon Lioznyansky was “pretty nervous.” He said, “I knew I had to perform well to make it to Grenoble.” At fencing tournaments, athletes first fence in pools of 6 to 7 fencers. Each athlete fences all the other fencers in their pool to 5 points. In epee fencing, a point is scored when a fencer touches any other part of the opposing fencer. In the first round of competition, Lioznyansky won all his pool bouts. “And I was the shortest fencer in the pool!” Lioznyansky explained, “It’s nice to have the reach of being tall, but you need to have good technique and good skills.”

Based on the fencers’ performance in pools, fencers advance to lengthier Direct Elimination bouts to 15 points to ultimately determine the winner of the competition. Men and women compete in separate events.

Lioznyansky, now a high school sophomore, started fencing at age 6. What lesson would he pass along to others? “Don’t underestimate anyone.” Besides fencing, Lioznyansky is an award-winning film actor and will be releasing a singing album in October.

Felicity Sebastian has fenced at Alliance Fencing Academy for 10 years. She is also an accomplished pianist and Eagle Scout. A junior at The John Cooper School in The Woodlands, Sebastian excels at school as well, filling her schedule with multiple AP classes. When asked what she enjoys most about fencing, Sebastian said, “I enjoy the mental and physical aspects of the game.” What has she learned most from fencing? Her response: “Be confident and don’t be afraid to commit to your plan.”

A spot on US traveling team combined with other sanctioned events over the fencing season positions fencers to earn a coveted spot to the World Championships held in April 2023. Only the top 3 fencers are selected to compete at the prestigious event. The World Championship is the highest level of competition on years when the Olympics are not held.