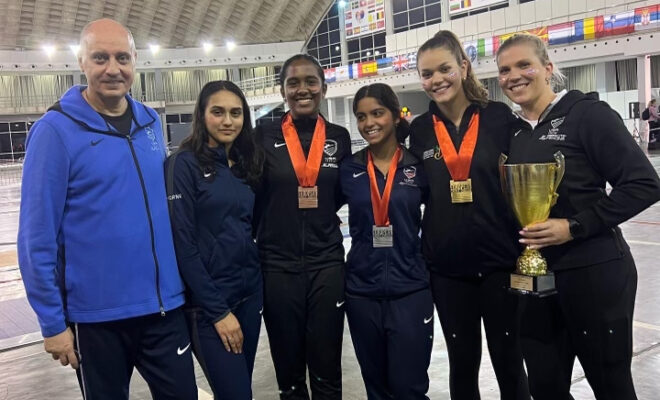 THE WOODLANDS, TX – Local Woodlands high school student Felicity Sebastian brought home the Bronze medal in the Women’s Cadet (Under 17 years old) Epee Team Event for the United States this past weekend in Belgrade, Serbia. Sebastian was selected to represent the USA on the United States’ International Cadet Fencing Team as one of the top 20 fencers in the United States in her age group.

Thirty-eight (38) teams from around the world competed in the event. Sebastian also placed 21st in the Individual Women’s Cadet Epee event in a field of 168 fencers from across the world. The Belgrade Open was part of the European Cadet Circuit and took place October 22-23, 2022 in Belgrade, Serbia. Sebastian fences at Alliance Fencing Academy, one of the largest epee fencing clubs in the United States. Sebastian’s performance in Belgrade secured her position to represent the USA again next month in Grenoble, France on November 12-13.

Felicity Sebastian has fenced at Alliance Fencing Academy for 10 years. She is also an accomplished pianist and Eagle Scout. A Junior at The John Cooper School in The Woodlands, Sebastian excels at school as well, filling her schedule with multiple AP classes. When asked what she enjoys most about fencing, Sebastian said, “I enjoy the mental and physical aspects of the game.” What has she learned most from fencing? Her response: “Be confident and don’t be afraid to commit to your plan.”

Only the top 20 fencers are selected to represent the United States on The International Cadet Team. The selection is based on USFA rolling-point standings. The USFA (United States Fencing Association) is the governing body for the sport of fencing in the United States. Fencers compete in team events as well as individual events.

In Individual competition, fencers are grouped in pools of 6-8 fencers. Based on the fencers’ performance in pools, fencers advance to lengthier Direct Elimination bouts to 15 points to ultimately determine the winner of the competition. A Fencing Team is comprised of 3 fencers and 1 alternate. Each team member fences all members of the opposing team to a maximum of 45 points, with each bout building on the previous teammates’ points. Men and Women compete in separate events.

A spot on the US traveling team, combined with other sanctioned events over the fencing season, positions fencers to earn a coveted spot to the World Championships held in April 2023. Only the top 3 fencers are selected to compete at the prestigious event. The World Championship is the highest level of competition on years when the Olympics are not held.