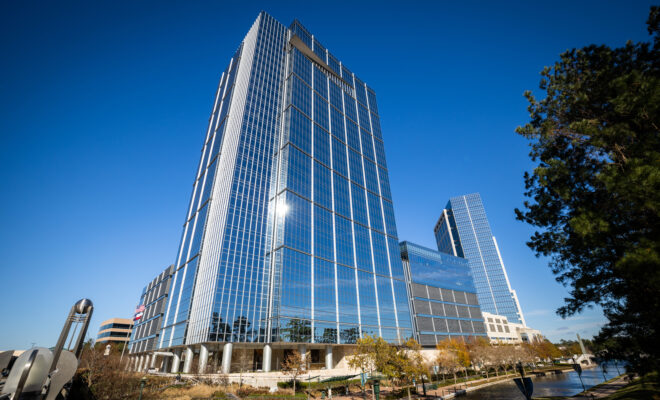 THE WOODLANDS, TX – The Howard Hughes Corporation® (NYSE: HHC) has announced that Obagi Cosmeceuticals LLC is relocating its corporate headquarters from California to The Woodlands®, Texas, adding to the now 32 businesses that have relocated, moved and expanded into the award-winning community, contributing 522,028 square feet of new office space and 2,000 new residents since 2020.

Obagi Cosmeceuticals, a global specialty pharmaceutical company, has leased 16,470-square-feet at The Woodlands Towers at The Waterway which brings the towers to a combined 82% leased, representing a strong leasing momentum since The Howard Hughes Corporation purchased the Class AAA towers at the end of 2019.

“The Woodlands continues to attract companies who are looking for a business-friendly environment, a vibrant talent pool of educated, skilled employees, and a high quality of life for those team members they hope to attract and retain,” said Jim Carman, President of the Houston Region for The Howard Hughes Corporation. “Complementing our office environment—one distinguished by abundant, high-quality amenities integrated into a walkable urban setting with convenient access to dining, shopping, and entertainment—is a lifestyle that has led to The Woodlands being named the best community to live in America for the last two years in a row.”

“Obagi Leadership made the critical decision to relocate to The Woodlands based on the evaluation of opportunities for the future success of its business and employee population. There are many driving factors that led us to make this business decision to relocate a portion of our Southern California employees to Texas and bring new job opportunities to The Woodlands market,” said Jaime Castle, President & CEO of Obagi Cosmeceuticals. “Some of the primary drivers are the favorable tax rate for businesses and residents and cost of living implications. Housing is simply unaffordable for many in Southern California, and our folks see the possibility of home ownership in their near future in Texas. We are very excited about the upcoming move and the opportunities it affords our relocating employees.”

Obagi Cosmeceuticals was founded by leading skin care experts in 1988 and built upon their legacy of science and innovation—making The Woodlands an ideal location for their next chapter of growth.

The company will occupy space in the 31-story 9950 Woodloch Forest Tower, which along with the 30-story 1201 Lake Robbins Drive make up the iconic The Woodlands Towers at The Waterway, which are both LEED® Silver and Energy Star® Certified buildings with both receiving the prestigious Builder Owners and Management Association (BOMA) 360 Performance Program designation.

Located in the heart of The Woodlands Town Center, amenities in the towers focus on health and wellness and include a two-story fitness center with locker rooms, panoramic views and easy access to The Woodlands Waterway 33,000-square-foot multipurpose rooftop terrace and conference facilities.

Obagi will open its corporate headquarters this fall in The Woodlands.

The Woodlands, a 28,500-acre award-winning master planned community located 27 miles north of downtown Houston, was recognized two consecutive years, 2022 and 2021, as the #1 Best Community to Live in America by Niche. The Woodlands offers an unprecedented 28% of green space, leading the way among master planned communities that practice environmental preservation. It is home to 120,000 people, and nearly 64,000 people work in the community. The Woodlands has received numerous past accolades including the Vision Award, Development of Distinction from the Urban Land Institute; three-time honoree of “Master Planned Community of the Year,” four-time recipient of “Humanitarian of the Year” and “Trailblazer of the Year” in 2018 by the Greater Houston Builders Association; American Trails Developer Award; Environmental Planning Award from the American Society of Landscape Architects, Texas Chapter Houston Section. The Woodlands is a community of The Howard Hughes Corporation®, which supports over 180 local causes in the Houston region through its HHCares program. For more information, visit www.thewoodlands.com. For additional details, find us on Facebook, Twitter, and Instagram.

The Howard Hughes Corporation owns, manages, and develops commercial, residential, and mixed-use real estate throughout the U.S. Its award-winning assets include the country’s preeminent portfolio of master planned communities, as well as operating properties and development opportunities including: the Seaport in New York City; Downtown Columbia®, Maryland; The Woodlands®, The Woodlands Hills®, and Bridgeland® in the Greater Houston, Texas area; Summerlin®, Las Vegas; Ward Village® in Honolulu, Hawaiʻi; and Douglas Ranch in Phoenix. The Howard Hughes Corporation’s portfolio is strategically positioned to meet and accelerate development based on market demand, resulting in one of the strongest real estate platforms in the country. Dedicated to innovative placemaking, the company is recognized for its ongoing commitment to design excellence and to the cultural life of its communities. The Howard Hughes Corporation is traded on the New York Stock Exchange as HHC. For additional information visit www.howardhughes.com.