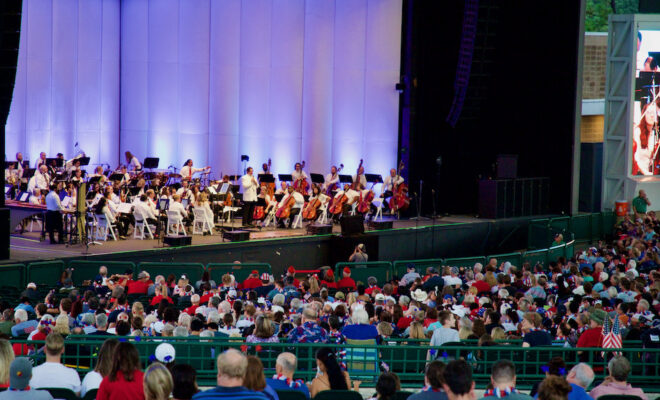 On Saturday, July 3, The Cynthia Woods Mitchell Pavilion celebrated America’s birthday and paid homage to our local service heroes at the “Stars at Night – A Salute to Service” event. The Pavilion welcomed The Woodlands Symphony Orchestra to the Main Stage at 8 p.m who performed a selection of patriotic favorites led by Artistic Director, Darryl Bayer. The event, sponsored by Howard Hughes Corporation and Woodforest National Bank, also recognized service stars (teachers, first responders, medical teams and front line workers) during the pandemic.

View photos from the event on our Facebook page here.

The Woodlands Symphony Orchestra promotes the growth of fine arts in The Woodlands area by sponsoring concerts and educational programs emphasizing a blend of classical compositions with popular music for a diverse 21st century audience. Artistic director and conductor, Darryl Bayer, received his bachelor’s in arts from Boston University and performed solos with both the Boston Symphony and Boston Pops. In Houston, Darryl completed his master’s degree from University of Houston and began auditioning and performing with regional and national symphonies. Bayer has been a Woodlands resident since 1992 and has helped build an audience and recognition for The Woodlands Symphony since he took over in 2014. The symphony will also welcome Associate Conductor, Clarence Frank and Sinatra-inspired vocalist, Bryan Anthony to the stage throughout the evening.

The evening’s program included John Williams’ Summon the Heroes, Patriotic favorites such as: the Armed Forces Salute, God Bless the USA and the Star Spangled Banner. The Symphony also performed a special version of Toto’s Africa which that featured students from Let Them Drum, a group for recreational and therapeutic drumming for all ages and abilities.

Families can register their children at any of The Pavilion’s performing arts events this season (look for signage in the North or South Plaza) or online at www.woodlandscenter.org/mini-maestros.

For more information about The Pavilion visit their website at www.woodlandscenter.org.