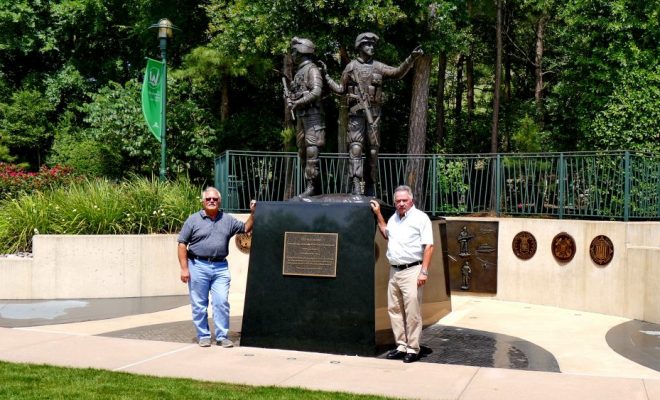 THE WOODLANDS, TX – Memorial Day is a sacred day to all who have served. America’s collective consciousness demands that all citizens be reminded of the sacrifice of their fellow countrymen. By honoring all our nation’s war dead, we preserve their memory and thus their service to this great nation. The contributions of veterans and their families culminate with special responsibilities engendered by personal sacrifices that place a solemn burden on model communities like The Woodlands. Our veterans must never be forgotten.

In 2004, The Greater Woodlands Public Art Foundation (TGWPAF) pioneered the concept of a veteran’s memorial to be supported by a fundraising drive. Over the next eleven years, the Foundation worked tirelessly to raise sufficient funds to create a memorial that now graces Town Green Park in The Woodlands.

“This monument, named ‘The Way Home,’ was unveiled on Memorial Day 2015, and is in recognition of all those who have served our country, some of whom have made the ultimate sacrifice,” said Everett Ison, President of the TGWPAF. “We must never forget that their service allows us to live safely and freely in the United States,” continued Ison.

The monument was paid for solely by donations from local companies and organizations. Over 1,000 memorial tiles were sold to anyone who wanted to honor a veteran. The land for the monument was graciously donated by The Woodlands Township.

This memorial is the only one in the state of Texas that honors veterans from all wars and has received prestigious recognition by the Smithsonian. Atop the base of the monument stands two young men who were residents of The Woodlands area – Army CPL. Cory C. Kosters who was killed in Iraq on 03/05/2007, and Army CPL. Zach R. Endsley, who lost his life in Afghanistan on 06/23/2007.

This sculpture was created by Edd Hayes, who has a number of public art works around The Woodlands and holds the title of “Official Texas State Sculptor.” Hayes meticulously worked on every detail of this sculpture for over 18 months. In addition to the main sculpture, Hayes created a number of smaller military themed works that adorn the wall behind the monument.

“As a nation we remember our veterans on Memorial Day, but this monument helps to serve as a continuous reminder of the contributions made by our service men and women every day,” said Bill Wingo, Treasurer and Project Chairman of GWPAF. He said he has had many contributors and tile purchasers say they feel special pride whenever they pass by the sculpture and proudly show it to visitors. Wingo added, “We are asking all residents and supporters to expand on their pride by ensuring ‘The Way Home’ memorial will be carefully maintained and possibly expanded with appropriate additions as dictated by the level of community support and suggestions.”

“Today we launched a web site at thewayhomeproject.com so people everywhere can learn about Zach and Cory, and pay tribute to our veterans,” continued Wingo. The web site has detailed information on these heroes along with photos and videos. The site also has an order form for anyone who would like to purchase memorial tiles, or sponsors who would like to help with the costs associated with maintaining the memorial.

For additional information, contact Bill Wingo, Treasurer, The Way Home Project at 281-367-9990 or by email at bwingo@wingocompanies.com.