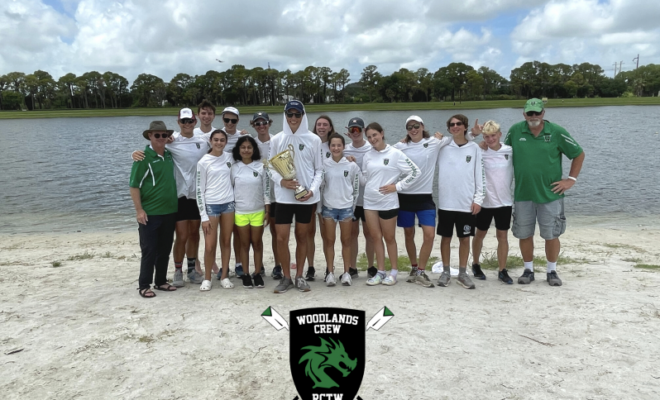 THE WOODLANDS, TX – The culmination of hard work for twelve local youths ended on a national stage with one teammate earning the top spot, a gold medal in the Men’s Youth Single Scull (1x).

The USRowing Youth National Championship hosted its annual regatta at Nathan Benderson Park in Sarasota, Florida from June 9-12, 2022. Over 2,000 athletes from 200 clubs across the country raced in this year’s event. Time trials on Thursday determined whether athletes would go on to race head-to-head in the semi-finals in an A/B final race or advance to a C/D final. Medals were awarded to the A finals finishers after Sunday’s races.

For the second year in a row, Rowing Club of The Woodlands (RCTW) qualified entries to this prestigious event that showcases the best rowers under age 19. In the Men’s Single Scull (1x), RCTW captured the Gold medal as well as 8th place. The men’s Quad (4x) raced in the B final with a 12th place result. All six entries moved forward beyond time trials to a final race.

National Champion Devan Godfrey implemented his race plan perfectly: holding steady during the first 1,000 meters, and then surpassing the field during the second. He crossed the finish line of the 2,000 meter sprint in 7 minutes 11.876 seconds, edging out his nearest competitor by 2 seconds. A fourth-year member of the club, Devan is thankful to his teammates for the support, competition, and motivation to achieve this lofty goal.

This gold medal represents the first national champion from The Woodlands, and the Greater Houston area.

The event was a family affair with siblings among the twelve competitors. Joining the club less than a year ago to row with his older brother, Oliver Hinkle tenaciously pursued and achieved the goal of competing in the U17 men’s single scull. Another extraordinary athlete who has been rowing less than a year, Allison Fruehwirth of the U17 women’s quad said, “Nothing could have compared to going to the youth national regatta with my two amazing brothers. They were so supportive!” Coaches, parents, grandparents, siblings and friends cheered the team on from the moment they put the boat in the water to the shore at the finish line.

According to Head Coach Davis Colwell, these outstanding results are “an outward expression of countless hours of effort and dedication by all of the athletes,” and these wins rest on the shoulders of the entire club. He looks forward to building upon the successes of 2022, continuing this trajectory of excellence into 2023 and beyond.

Summer training is already underway, with diligent preparation for a strong and fast fall season. The opportunity is there for those who wish to become champions; openings are available for summer learn to row camps for youth aged 14-18.

Rowing Club of The Woodlands is a registered 501(c)(3) non-profit organization dedicated to offering an assortment of recreational, intermediate, and elite rowing opportunities for all wishing to experience the sport of rowing for The Woodlands and surrounding communities.