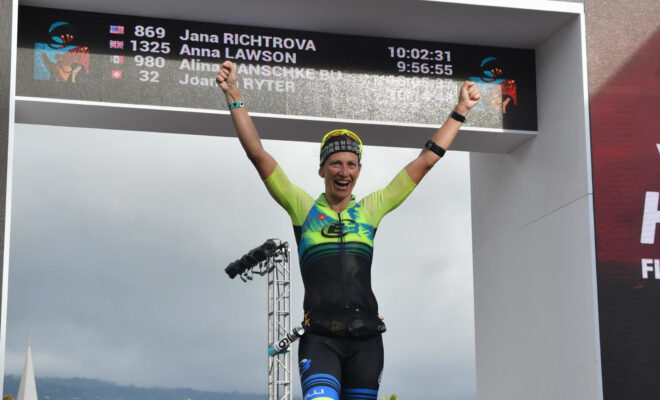 Approximately 5,000 athletes representing 92 countries, regions and territories toed the start line in Kona to compete in this world-renowned event that took place over two days for the first time in the 40-plus year history of the race. The women ranged in age from 19-78. As the iconic endurance event returned to Kailua-Kona for the first time in three years, the IRONMAN `Ohana united to Kū Like (stand together) as athletes made their long-awaited trip to compete in triathlon’s pinnacle event.

Jana Richtrova completed the 2022 VinFast IRONMAN World Championship event in 10:02:31 (swim: 1:13:28; bike 5:06:47 run: 3:33:39), beating out the top athletes in their age group. The 2022 field of triathletes tackled the ROKA 2.4-mile ocean swim in Kailua Bay, followed by the FULGAZ 112-mile bike ride along the Queen Ka’ahumanu Highway from Kailua-Kona to the turnaround in Hawi, capped with a 26.2-mile HOKA run beginning on Ali’i Drive, where spectators packed the roads, up Palani Road to the Queen Ka’ahumanu Highway, before making their way to the infamous Natural Energy Laboratory of Hawai`i Authority. Athletes completed their journey to the roar of thousands of spectators as they crossed the historic Ali’i Drive finish line.

Since its inception in 1978 on the Island of O`ahu, the IRONMAN World Championship has etched its name in history through stellar performances, inspirational participants and emotional memories. In 1981, the race moved from the tranquil shores of Waikīkī to the barren lava fields of Kona on the Island of Hawai`i where it continues to take place to this day. The most iconic one-day sporting event in the world is the culmination of 40 global IRONMAN events with over 94,000 athletes around the world striving for one of the coveted qualifying slots. The 2021 edition of the event took place in St. George, Utah in May 2022, becoming the first location to host the event outside of Hawai`i since its origins in 1978. After a two-year hiatus from Hawai`i due to COVID, the race returns to Kona and takes place for the first time as a two-day event in October for the 2022 edition of the VinFast IRONMAN World Championship. The 2023 VinFast IRONMAN World Championship will see the event continue with the two-day format but with a dedicated race day for women and dedicated race day for men. With two days of racing, the event will host approximately 5,000 athletes as they embark on a 140.6-mile journey that presents the ultimate test of body, mind, and spirit to earn the title of IRONMAN World Champion. For more information, visit www.ironman.com/im-world-championship.

The IRONMAN Group operates a global portfolio of events that includes the IRONMAN® Triathlon Series, the IRONMAN® 70.3® Triathlon Series, the IRONMAN® Virtual Racing™ (VR™) Series, 5150™ Triathlon Series, the Rock ‘n’ Roll® Running Series, the Rock ‘n’ Roll Virtual Running™ Series, IRONKIDS®, World Triathlon Championship Series, premier running events including the Standard Chartered Singapore Marathon™ and City2Surf®, UTMB® World Series events including Tarawera Ultra and Ultra-Trail Australia™, Epic Series™ mountain bike races including the Absa Cape Epic®, road cycling events including Haute Route®, and other multisport races. The IRONMAN Group is the largest operator of mass participation sports in the world and provides more than a million participants annually the benefits of endurance sports through the company’s vast offerings. Catering to the full athlete experience, the company portfolio also includes FulGaz® virtual cycling, the most realistic indoor riding experience connected fitness application aimed at preparing athletes for real-world events. Since the inception of the iconic IRONMAN® brand and its first event in 1978, athletes have proven that ANYTHING IS POSSIBLE® by crossing finish lines around the world. Beginning as a single race, The IRONMAN Group has grown to become a global sensation with hundreds of events across 55+ countries. The IRONMAN Group is owned by Advance, a private, family-owned business. For more information, visit www.ironman.com/about-ironman-group.

Advance is a private, family-held business that owns and invests in companies across media, entertainment, technology, communications, education and other promising growth sectors. Our mission is to build the value of our companies over the long-term by fostering growth and innovation. Advance’s portfolio includes Condé Nast, Advance Local, Stage Entertainment, The IRONMAN Group, American City Business Journals, Leaders Group, Turnitin, 1010data and Pop. Together these operating companies employ more than 17,000 people in 29 countries. Advance is also among the largest shareholders in Charter Communications, Warner Bros. Discovery and Reddit. For more information visit www.advance.com.