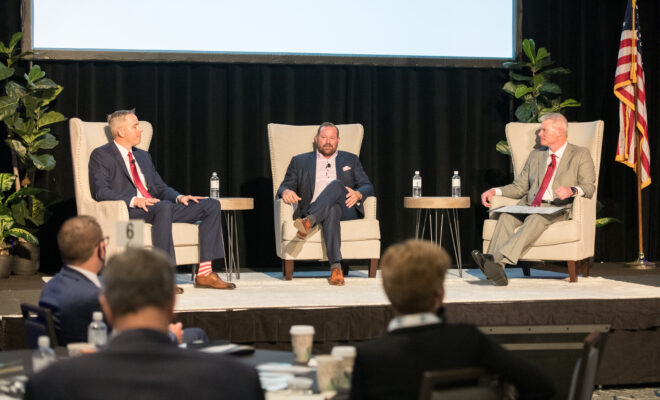 The 35th Annual Economic Outlook Conference took place on April 14, 2021 at The Woodlands Waterway Marriott Hotel & Convention Center. It was a well-attended event by businesses from within The Woodlands Community and The Greater Houston Area. A hybrid option was offered for the first time this year. There were over 400 in-person attendees, in addition to over 100 virtual attendees.

View photos from the event provided by The Woodlands Area Chamber of Commerce:

Economic update speaker Mr. Robert S. Kaplan, President & CEO of The Federal Reserve Bank of Dallas, described challenges faced by the pandemic including unemployment and spoke about GDP growth, inflation, the workforce and vaccinations. After his presentation members of the audience were invited to ask questions. Mr. Gil P. Staley, CEO of The Woodlands Area Economic Development Partnership, released key information from a workforce survey done with major and midsize employers in our area. Mr. Gordy Bunch, Chairman of The Woodlands Township, touched on topics relating to incorporation, the hard work of first responders over the past year, tourism, aging neighborhoods in The Woodlands, and The Lone Star Groundwater Conservation District. National update speaker, U.S. Congressman Kevin Brady, U.S. Representative Serving The 8th District announced his retirement at the end of this term and was met with a standing ovation from the audience.

This year, the regional update included an address from Ms. Christi Craddick, Chairman of The Texas Railroad Commission. She spoke about the importance of the railroad commission to the state along with ongoing and completed projects. The regional update also included a fireside chat with speakers Daniel Signorelli, President & CEO of The Signorelli Companies and Jim Carman, President – Houston Region of The Howard Hughes Corporation. This was moderated by Mr. JJ Hollie, President & CEO of The Woodlands Area Chamber of Commerce. The fireside chat included discussions on the major impact of COVID-19 on traditional employee structures and how work-from-home trends have affected office vacancy rates. Both panelists spoke about collaborations between their organizations and others upcoming major projects and exciting new trends.

The conference included a port panel which consisted of Ms. Phyllis Saathoff, Executive Director / CEO of Port Freeport and Mr. Roger Guenther, Executive Director of the Port of Houston. The conversation included: The ports’ impact on the state’s economy; deepening and widening updates; short-term and long-term plans for expansion. The panelists discussed the importance of the ports working together with the energy and Petro-chemical industries, as well as rail and trucking companies to move freights.

The Economic Outlook Conference is planned annually by The Woodlands Area Chamber of Commerce with the intention to provide economic updates and shareable, valuable information for business leaders. The event also offers a business expo that provides sponsors and attendees the opportunity to engage in one-on-one conversations.

Learn more about the annual Economic Outlook Conference and The Woodlands Area Chamber of Commerce at woodlandschamber.org.