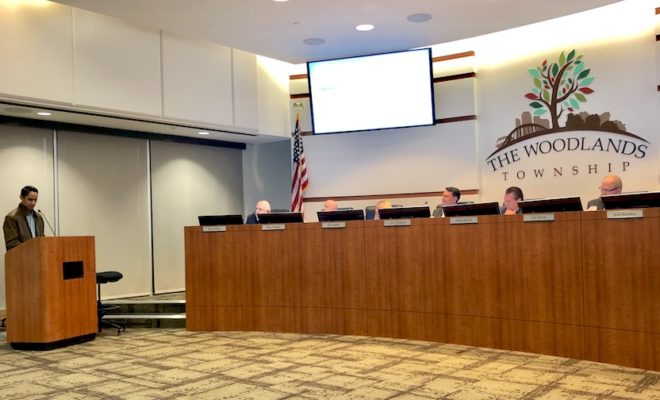 During the public meeting, numerous residents came to the podium to present comments before the Board of Directors and attendees.

The Woodlands Express to the Houston Rodeo

The Board of Directors received an amendment to the contract for commuter bus service with First Class Tours adding expanded services to the Houston Rodeo.

On January 28, The Woodlands Township announced a new service using The Woodlands Express, the Township’s Park and Ride transportation service to Houston, to take residents NRG Stadium on weekends during the rodeo. After promoting the service through print ads and promotions, the outcome in ticket sales were less than expected.

The service will be provided three weekends during the rodeo: March 2 and 3, March 9 and 10, and March 16 and 17, 2019. Park N Ride transportation would not run to the Houston Rodeo during the week due to availability and the current contract.

In order increase interest, ticket sales, and a successful first year, the board voted unanimously to reduce the current rate of $25 per round trip ticket to $13, the current cost of Park & Ride tickets. The buses are scheduled to run no matter the outcome of the number of passengers signed up through online reservation. Refunds will be issued to tickets purchased at the previous higher $25 round ticket price.

Board of Directors Chairman Gordy Bunch addressed the public comments and concerns individually regarding the Incorporation Planning Study noting, “We are only halfway there. We know we are not done.”

Bunch continued sharing updates, stating the Board of Directors met with Montgomery County Sheriff Rand Henderson to determine and reveal pieces missing from the law enforcement study for incorporation. The comparison of The Woodlands plan to Conroe’s police department structure was also discussed. The Montgomery County Sheriff does provide specializes services to Conroe, but Conroe opted out of various services. Bunch confirmed that if The Woodlands voted to incorporate, the plans do not involve opting out of these services.

Next week during the February 27 session, the opportunity to have dialogue with The Novak Consulting Group on the law enforcement study and new developments will be available.

Bruce Rieser emphasized, “We are not rushing. We haven’t even figured out how. When we figure out how, we will figure out cost. We are in the how phase.”

Bunch continued the discussion, stating,  “This is not a November 2019 ballot issue. I said I only would support having the vote in a high voter turnout year – a presidential or governor voting year – which would be November 2020 or 2022.”

Rieser agreed, “We need as many people as we can in the polls. But for now we don’t know how we need to do it. We need to find out how.”

Get more information about the Incorporation Planning Study at www.thewoodlandsincorporationstudy.com.

Repairs of the Waterway Square Fountain

An update was presented to the board on the repairs of the Waterway Square Fountain. The repairs that were needed were much more extensive than originally expected. In January, the repair process began with preliminary work currently underway by a third party contractor.

By Memorial Day (May 27, 2019), the Waterway Square Fountain is predicted to be back online and in use.

A public hearing was held regarding amendments to The Township’s 2019 Pool Fees.

Bear Branch pool rental fee was requested to be changed to be in line with area pools, $350. The staff recommended that due to the demand of water inflatables that a rental fee be added. The proposed rate to be considered was $100 for 2 hours of use. After discussion, the cost of some of the inflatables, including giant floating slides, were estimated to cost around $5,000 each.

The request to amend the pool and rental fees was approved.

The international soccer tournament previously was held in San Antonio, but due to weather, the tournament wanted to move to the desirable all-weather fields in the Township. The agreement was proposed for 3 year term, same as approved in the previous agreement, except for the number of hotel rooms Premier Soccer Services would be rebated for. The CVB asked for the support of the Township in the new agreement.

The event is planned to be held during Thanksgiving week, thus bringing revenue during a low demand period in The Woodlands. The agreement only includes providing rebates for hotel rooms booked within Township and in 2018, 1385 rooms were validated. Per the board members, local hotels showed their support for the agreement, thus filling their rooms during a low demand time. Board members also confirmed fields are currently not being used for other local tournaments. The board also argued that the tournament would increase economic development and attraction to The Township.

The majority of the Board of Directors approved, while John McMullan opposed the agreement.

In December 2018, the CMAQ Commuter and Transit Services Pilot Program Grant was awarded, thus allowing the planning to begin for The Woodlands Express park and ride program to serve commuters traveling from The Woodlands to the Energy Corridor.

In January 2019, solicitation began to connect with Energy Corridor companies. The Township is currently undergoing a survey with companies and analyzing the demand for the service. A presentation to the Energy Corridor Board is scheduled on March 8 with plans to request that they fund the service partially. The survey will end on March 5 with additional updates to be expected by April 2019.

For more information, agendas, meeting minutes, and video of the meeting, visit www.thewoodlandstownship-tx.gov.