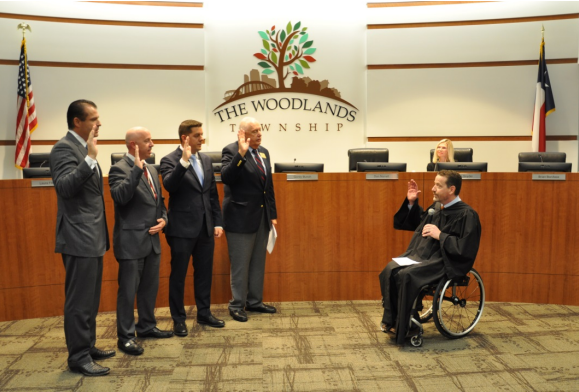 At the beginning of the meeting, The Woodlands Township recognized outgoing directors Ed Robb, Mike Bass and Jeff Long and honored them with framed proclamations recognizing their dedication to the community. 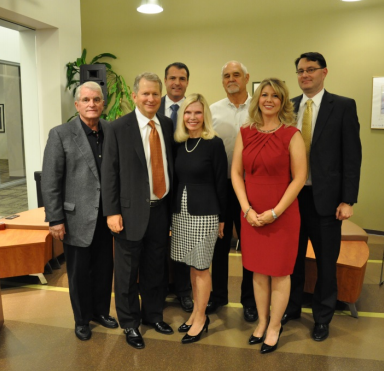 Gordy Bunch, Brian Boniface, John Anthony Brown and Bruce Rieser were sworn into office to serve two-year terms after each won their elections on November 8, 2016.  The Board of Directors then elected their officers for December 2016 through November 2017 to be Chairman Gordy Bunch, Vice Chairman John McMullan, Secretary Laura Fillault and Treasurer Ann Snyder.

Richard “Gordy” Bunch, Position 1, and his wife Michelle have been residents of The Woodlands since 1995 and have three boys who attend Conroe Independent School District (CISD) schools. He is the founder, president and CEO of The Woodlands Financial Group (TWFG). TWFG and the Bunch family support a number of causes, including Toys for Tots, Interfaith, Fellowship of Christian Athletes and many others. Mr. Bunch is a decorated U.S. Coast Guard veteran and Entrepreneur of the Year for the Gulf Coast region.

Brian Boniface, Position 2, has been a resident of The Woodlands since 2005. He and his wife Nicole have two daughters, both of whom attend Colin Powell Elementary School. Mr. Boniface retired from the National Guard after six years of service in 2015 as an S-3 Operations Officer for the Battalion. He is currently an IMU nurse at Kingwood Medical Center and the Montgomery County Mental Health Treatment Facility. Mr. Boniface graduated from Worcester State University in 2003 with a Bachelor of Science in Health Sciences and went back to school in 2012 to complete an Associates Degree in Nursing from Lone Star College-Montgomery.

John Anthony Brown, Position 3, has been a resident of The Woodlands since 2010. He has a stepson and a daughter with his wife Bonnie. He is a licensed realtor and has been so for more than eight years, with previous licenses in Pennsylvania and New Jersey. He is the facilities supervisor for Huntsman International at its corporate headquarters in The Woodlands. He graduated with honors from The Art Institute of Philadelphia while obtaining an Associates Degree of Science in Web Development and will soon graduate from Brigham Young University-Idaho.

Bruce Rieser, Position 4, has lived in The Woodlands since 1989. Married nearly 31 years, he and his wife Sarah have one grown daughter. He retired from British Airways in 2010 as director of properties for the Americas. In 2011, he founded SKR Consulting, LLC and is currently representing the Foreign Flag Carriers in the Mickey Leland International Terminal Redevelopment Program at Houston Bush Intercontinental Airport. Mr. Rieser graduated from Ohio State University.

For more information on The Woodlands Township Board of Directors, please visit www.thewoodlandstownship-tx.gov/board, or call 281-210-3800.