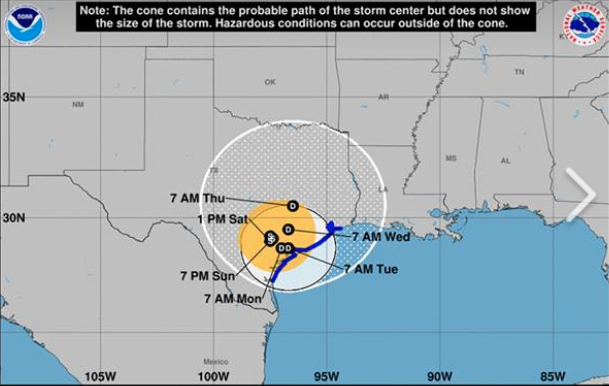 Tropical Storm Harvey is barely moving and still producing bands of very heavy rainfall this afternoon. Continued heavy rainfall and the flooding it causes is the primary threat to Southeast Texas. Numerous flash flood warnings have been issued across the area, and widespread flooding is possible into early week at the least. Tornadoes have also occurred in the area through the day, and will continue to be a threat tonight.

Coastal flooding can be expected at the shore where winds will continue to push water onshore. Tropical storm force winds are still a potential threat, primarily in the southwestern portions of the area towards Matagorda Bay. Storm surge will be slow to recede through Sunday, particularly west of Freeport. Though there are multiple
hazards present in the area, the greatest threat to life and property in the coming days are tied to the potential for extreme rainfall amounts. This rain will lead to a prolonged, dangerous, and potentially catastrophic flooding event well into next week.

* WIND:
Potential impacts from the main wind event are now unfolding across the Matagorda Bay area. Remain well sheltered from dangerous wind having possible significant impacts. If realized, these impacts include:
– Some damage to roofing and siding materials, along with damage to porches, awnings, carports, and sheds. A few buildings experiencing window, door, and garage door failures. Mobile homes damaged, especially if unanchored. Unsecured lightweight objects become dangerous projectiles.
– Several large trees snapped or uprooted, but with greater numbers in places where trees are shallow rooted. Several fences and roadway signs blown over.
– Some roads impassable from large debris, and more within urban or heavily wooded places. A few bridges, causeways, and access routes impassable.
– Scattered power and communications outages, but more prevalent in areas with above ground lines.

Elsewhere in Southeast Texas, there is the potential for winds having limited to significant impacts. Winds are expected to be strongest in and near the strongest thunderstorms in rain bands.

Potential impacts from the main surge event are also now unfolding across the Upper Texas Coast east of Sargent. Remain well away from locally hazardous surge having possible limited impacts.

* TORNADOES:
Potential impacts from tornadoes are still unfolding across Southeast Texas. Remain well braced against a tornado event having additional limited impacts. If realized, these impacts include:
– The occurrence of isolated tornadoes can hinder the execution of emergency plans during tropical events.
– A few places may experience tornado damage, along with power and communications disruptions.
– Locations could realize roofs peeled off buildings, chimneys toppled, mobile homes pushed off foundations or overturned, large tree tops and branches snapped off, shallow-rooted trees knocked over, moving vehicles blown off roads, and small boats pulled from moorings.
* EVACUATIONS:
Do not return to evacuated areas until hazardous winds diminish and flood waters abate.

RECOVERY PHASE – Do not return to evacuated areas until it is safe.
Listen for the all-clear signal from local authorities.

* OTHER PREPAREDNESS INFORMATION:
Now is the time to remain safely sheltered from the storm. Stay inside and away from windows. Listen for updates and be ready in case you lose electrical power. Locate your battery powered radio and flashlight from your Emergency Supplies Kit. Keep these items close.

During the peak of the storm, keep your shoes on and rain gear handy.
Boots and tennis shoes offer the best foot protection if you become unexpectedly exposed to the elements.

Continue to keep your cell phone well charged for as long as possible. If you lose power, use it more sparingly and mainly for personal emergencies and check-ins. Do not overload communications systems with idle chatter.

Do not be a thrill seeker or risk your life for senseless photos or videos. Be wise and avoid becoming another statistic.

Be ready to move to the identified safe room if a tornado warning is issued. Quickly move to an interior room on the lowest floor.
Put as many sturdy walls between you and the storm as you can.
Protect your head and body.