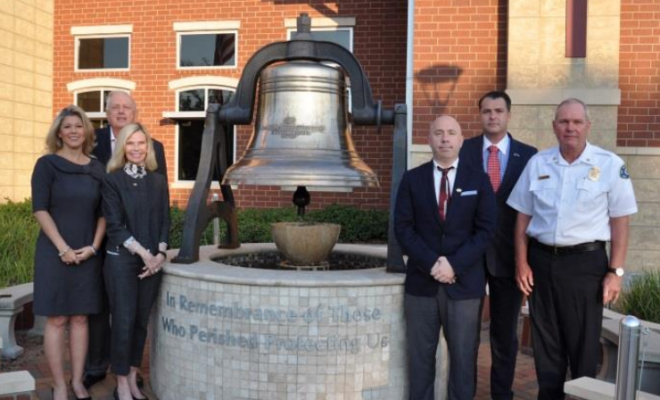 The ceremony was held at The Woodlands Central Fire Station. Fire Chief Alan B. Benson welcomed the attendees and introduced The Woodlands Fire Department Honor Guard for the Presentation of Colors. Steve Vaughn, fire department chaplain, offered the invocation. Following the Pledge of Allegiance, Caroline Freeman performed the national anthem.

Chairman of the Board Gordy Bunch then spoke about the lasting impact that the events of September 11th left upon the United States and its citizens.

“Today, we remember the nearly 3,000 people who lost their lives during the September 11, 2001 terror attacks on the United States,” Bunch said. “Of these individuals, over 400 were first responders who selflessly entered harm’s way to help retrieve survivors and those who had perished. Sixteen years later, the aftermath of the heinous acts still remains with those who suffered the loss of a loved one or experienced the horrific events firsthand at ground zero.”

Bunch then recognized Mrs. Kerri Welch, a current resident of The Woodlands, who had reported for jury duty in the City Hall area of downtown Manhattan on that fateful morning.

“Mrs. Welch has since struggled with Post Traumatic Stress Disorder as a result of her harrowing experience near ground zero,” he said. “Although she has found comfort in her Emotional Support Animal, a dachshund named Mazzy Star Sweeney Welch, her story is the reality for thousands of other Americans who continue to feel the aftereffects of that day. To commemorate this day, I would like to take a moment to read the Proclamation which solidifies this event in The Woodlands.”

After the reading of the Proclamation, The Fireman’s Prayer was read and the firefighters in attendance took part in The Ringing of the Bell. The 200-year-old tradition honors the life of fallen firefighters. After the bell rings three times, the firemen’s gloved fingers hold the bell to silence the ringing. At the final toll of the bell, it is left untouched to ring out in honor of the fallen.

At 7:48 a.m., the moment when the first plane struck the Twin Towers, the group observed a moment of silence and reflection. Chairman Bunch then closed the ceremony with an encouragement to the group to remember those lost while continuing to think of those still in conflict as a result of September 11th.

The Township hosted a second ceremony at 5:30 p.m. in commemoration of First Responders Day at Town Green Park, 2099 Lake Robbins Drive, at 5:30 p.m.

Watch the full ceremony captured by Hello Woodlands in a LIVE Facebook video:

For more information about The Woodlands Township, visit www.thewoodlandstownship-tx.gov or call 281-210-3800.