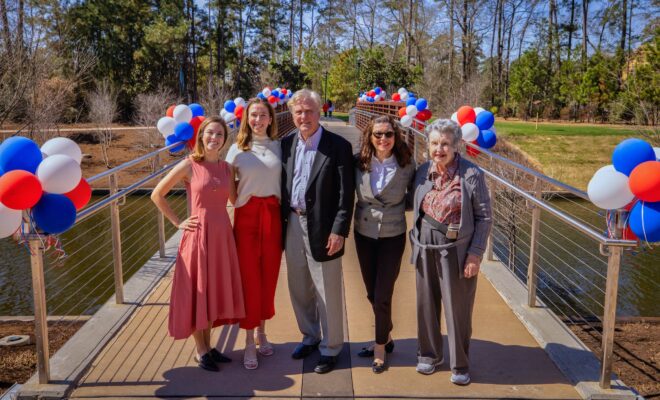 Having recently retired as Vice President of Planning & Design, Heineman’s career spanned 48 years as part of the original team for The Woodlands, playing an integral role in The Woodlands for nearly five decades.

The dedication ceremony was held on Monday, March 8, the three-year anniversary of the completion of The Woodlands Waterway, an award-winning 1.8-mile linear park and transportation corridor, linking urban residential living to shopping, business, dining and entertainment venues. The Waterway was a long-range project, which spanned 46 years. Heineman was the author of the 1972 diagram depicting a mixed-use downtown with a transit corridor down the heart of the current The Woodlands Town Center®, which included The Woodlands Waterway. A plaque showing the original diagram has been placed at the bridge.

“We are proud to honor Robert’s vision and contributions to The Woodlands by dedicating this bridge in his name, the Robert Heineman Pedestrian Bridge,” said Jim Carman, President, Houston Region for The Howard Hughes Corporation. “Robert has played a significant role in The Woodlands from its inception. Through his visionary planning, he helped shape The Woodlands into one of the most admired and successful master planned communities worldwide.”

Along with The Woodlands Waterway, Heineman has been involved in all aspects of planning for The Woodlands including the master plan, the village and neighborhood designs, the environmental plan, the open space system, drainage, the mobility system, parks and pathways and the plan for the Town Center.