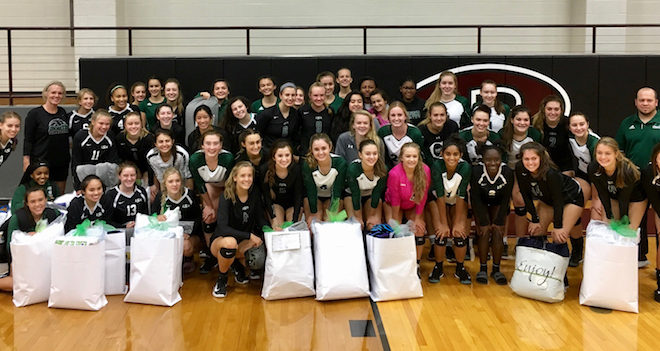 THE WOODLANDS – When members of the undefeated John Cooper School volleyball team were preparing to play Lutheran South Academy (LSA) following Hurricane Harvey, they learned that many in the opposing team’s community were adversely affected by the storm and school facilities were extremely damaged.

An email from Lutheran North graduate and Cooper volleyball parent Rhonda Salerno alerted the team that two members of the opposing team lost their homes, getting out with just the clothes on their backs, and many others were also affected. Cooper head volleyball coach Ray Hedden learned that LSA lost their school, gym and home for games and practices, potentially for the remainder of the school year.

Upon learning the news, the Cooper volleyball teams began collecting bedding items and just two days later had pillows, blankets, beds-in-a-bag and other donations, to bring with them for their opponents.  Following the game, the Cooper team invited LSA players to center court, and following a short speech by Cooper co-captain Mia Salerno, were presented with the collected items.

“It was a great moment that showed true sportsmanship,” said Coach Hedden. “At the end of the day, this is a game. I am proud of the girls for showing their character and support for our volleyball community.”

Rhonda Salerno concurred, saying the heartfelt sentiments were clearly evident. “We felt fortunate to not have been impacted by Hurricane Harvey in the way Lutheran South was,” she said.  “We wanted to let Lutheran South know that they were in our thoughts and prayers. There were many hugs and tears!”