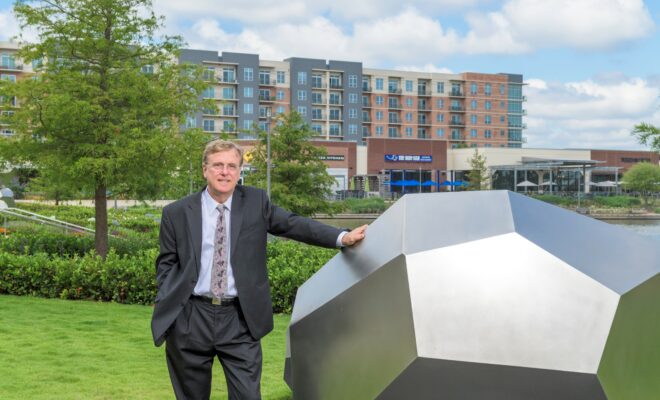 THE WOODLANDS, TX – The Howard Hughes Corporation® (NYSE: HHC) has announced the retirement of Robert Heineman, Vice President of Planning & Design. A member of the original planning team for The Woodlands®, Heineman has been integral to the development of The Woodlands for 48 years, almost a half century devoted to our community.

In the spring of 1971, while pursuing a Master of Architecture degree in Urban Design at Harvard University Graduate School of Design, Heineman was hired as a summer intern by Mitchell Energy & Development Company, founded by legendary oilman and visionary of The Woodlands, George P. Mitchell. That summer, he worked with the office of Ian McHarg and other planners in preparing the master plan of The Woodlands, for Mitchell, to be presented to HUD under the New Communities Program. Following graduation from Harvard in the spring of 1972, he began a 48-year career of planning The Woodlands. He has served as Vice President of Planning & Design for the last 36 years.

Heineman was the author of the 1972 diagram depicting a mixed-use downtown with a transit corridor down the heart of the current The Woodlands Town Center®. Today, that vision is now The Woodlands Waterway®, an award-winning landscaped, 1.8-mile linear park and transportation corridor, linking urban residential living to shopping, business, dining and entertainment venues. The completion of The Woodlands Waterway in 2018 is a shining example of a commitment to a long range vision that began as a simple diagram 46 years earlier.

“Robert has been vital to the creation of The Woodlands since its inception. He has been involved in all aspects of planning for our community, including the master plan, the village and neighborhood designs, the environmental plan, the open space system, drainage, the mobility system, parks and pathways and the plan for the Town Center including The Woodlands Waterway,” said Jim Carman, President, Houston Region, The Howard Hughes Corporation. “We are thankful for his vision and helping shape our hometown into one of the most successful master planned communities in the nation.”

Reflecting on his life-long involvement with The Woodlands, Heineman says, “It is truly a unique experience as a designer to have the opportunity to plan the community in which one lives and works. Little did I know that responding to a newspaper article sent to me by my parents in the spring of 1971 about an unknown project called ‘The Woodlands’ would result in both a lifetime career and the career of a lifetime.”

During Heineman’s tenure, The Woodlands has grown into a self-sustained, master planned community of 118,000 residents and nearly 2,200 businesses with over 68,000 jobs. It has achieved worldwide recognition for its innovative planning concepts and environmentally responsible development.

Robert and his wife, Pamela, are longtime residents of The Woodlands.