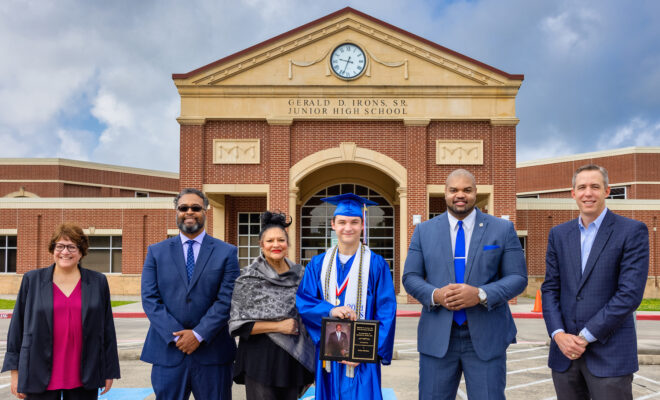 Mr. Irons served as an exemplary leader and volunteer of The Woodlands community for over 40 years. He had a 32-year career as Vice President of Business Development for The Woodlands Development Company, a wholly-owned subsidiary of Howard Hughes, and served on the Conroe Independent School District Board of Trustees for nearly 22 years. He and his entire family were named as one of the original The Woodlands Hometown Heroes in 1999. Mr. Irons was a leader on the football field as well, playing 10 years in the NFL for the Oakland Raiders and Cleveland Browns.

“We are honored to present our first annual Gerald D. Irons, Sr. scholarship, which we know followed the philanthropic principles in which Gerald believed,” said Jim Carman, President – Houston Region for Howard Hughes. “Gerald’s commitment and dedication to The Woodlands was incredible, and we are proud to facilitate a scholarship in his name to a deserving graduating senior. Kobe has a bright future ahead with his academic endeavors. We thank the Irons’ family for joining us to celebrate his scholarship presentation.”