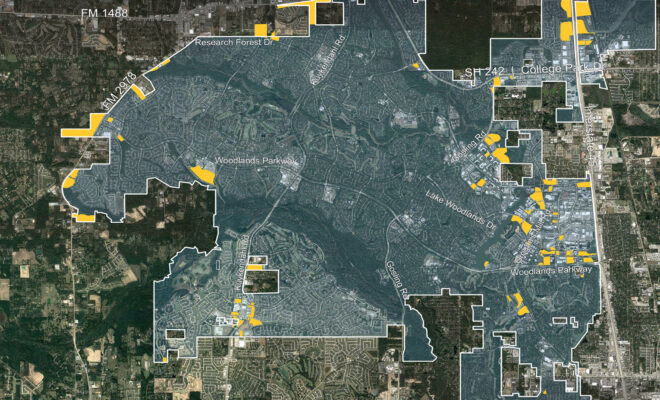 THE WOODLANDS, TX – The Howard Hughes Corporation® (NYSE: HHC) has announced the plan for submission of plat applications for the remaining commercial properties in The Woodlands® intended to be developed in future years.

The plats represent approximately 2.5% of the total acreage of The Woodlands, approximately 700 acres, located primarily in Town Center and along commercial corridors such as I-45, FM 1488, FM 2978 and Kuykendahl Road, where commercial development already exists. While no timeline for project development on these properties has been determined, the company has filed these applications in the interest of transparency and its commitment to candid communications with community stakeholders.

“We are presenting the areas we envision for future commercial development in the interest of transparency with The Woodlands community,” said Jim Carman, President of the Houston Region of The Howard Hughes Corporation. “We know residents are curious about our plans, and sharing this information eliminates the need for speculation or misinformation.”

“We have seen misinformation shared and have heard resident concerns about the possibility that Woodlands Parkway will eventually become like FM 1960,” added Robert Heineman, Vice President, Planning & Design of The Howard Hughes Corporation, who has been with the development company in The Woodlands for 46 years. “As our map indicates, this will never be the case. Howard Hughes has virtually no additional development sites along Woodlands Parkway. Existing covenants placed upon the land along Woodlands Parkway also ensure of its ultimate preservation.”

“During this time of uncertainty surrounding the future governance structure of The Woodlands, we reaffirm our dedication to developing these properties in a way that is consistent with George Mitchell’s vision and The Woodlands’ covenants—whether it remains a township or incorporates,” Carman continued. “We are unwavering in our commitment to complete the vision for a cohesive master plan of The Woodlands, which has been recognized as one of the top places in the country to live, work, play and learn.”

Over The Woodlands’ 46-year history, every parcel of land that has been developed has been subject to the same plat approval process—the first step in a multi-step process required for development. Plat approval does not establish a timeline for development, nor does it signal that a project is imminent.

“We will develop these commercial properties thoughtfully and methodically over the course of the coming years, based on market demand and economic indicators,” said Carman. “As with all of our projects, storm water management, traffic and tree removal are among many items that will be carefully considered on a project-by-project basis prior to the start of any development, as we continue to abide by the covenants, and preservation and design standards of our master planned community.”

With the exception of a very small area in Creekside Park and the remaining lots in East Shore, residential development at The Woodlands is complete. Of the 28,800 acres in The Woodlands, 7,665 acres are devoted to green space. Nearly 8,000 acres, or 28%, will remain undeveloped as open green space after full build-out. For more information, visit TheWoodlands.com.

The Howard Hughes Corporation owns, manages and develops commercial, residential and mixed-use real estate throughout the U.S. Its award-winning assets include the country’s preeminent portfolio of master planned communities, as well as operating properties and development opportunities including: The Seaport District NYC in New York; Columbia, Maryland; The Woodlands®, The Woodlands Hills, and Bridgeland® in the Greater Houston, Texas area; Summerlin®, Las Vegas; and Ward Village® in Honolulu, Hawaiʻi. The Howard Hughes Corporation’s portfolio is strategically positioned to meet and accelerate development based on market demand, resulting in one of the strongest real estate platforms in the country. Dedicated to innovative placemaking, the company is recognized for its ongoing commitment to design excellence and to the cultural life of its communities. The Howard Hughes Corporation is traded on the New York Stock Exchange as HHC. For additional information about HHC, visit HowardHughes.com.