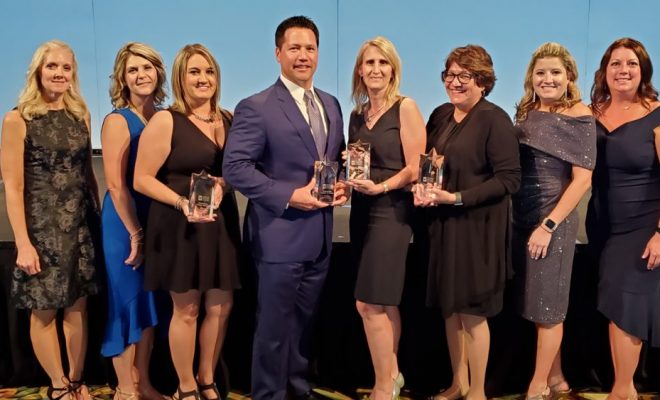 THE WOODLANDS, TX — The Howard Hughes Corporation recently won four state marketing awards from the Texas Association of Builders at its 2019 STAR Awards, held in Grapevine, Texas. The Woodlands, one of the most successful master planned communities in Texas, took home three marketing awards, and Kim Phillips, Vice President of Marketing for Howard Hughes, was named Marketing Professional of the Year.

The Woodlands took home Best Website, Developer for TheWoodlands.com. The master planned community’s website was completely redesigned in 2018, creating a more modern and vibrant feel, reflecting the lifestyle of The Woodlands. The Woodlander, a journal of modern life, received Best Social Media Marketing Program, Developer. The Woodlander showcases a unique look at the human aspect of The Woodlands, along with the amazing amenities and lifestyle.

The Woodlands Waterway, a 1.8-mile water amenity, transportation corridor and linear park in the heart of The Woodlands Town Center, was named Best Community Amenity, Developer. Construction of The Woodlands Waterway began in 1999 and was developed in phases culminating in a March 8, 2018 Grand Opening Dedication, marking the end of a successful, nearly two decade public/private partnership project.

Kim Phillips, who was named Marketing Professional of the Year, oversees the strategic marketing and brand communications for The Woodlands, Bridgeland and The Woodlands Hills, award-winning master planned communities in the portfolio of Howard Hughes.

“What an incredible honor to be recognized by the Texas Association of Builders for our marketing efforts,” said Phillips. “This award is a reflection of the hard work and success of our entire marketing team.”

Along with The Woodlands, both Bridgeland, which was recently announced as the #1 selling community in Houston, and The Woodlands Hills, one of Houston’s newest communities, were finalists for seven additional STAR awards.

According to the Texas Association of Builders, the coveted STAR Awards were founded in 1992 as a “statewide tribute to excellence in the building industry.” The awards this year highlight the consideration Howard Hughes has put toward amenities for residents and prospective buyers, as well as the great marketing efforts of teams around Houston.

Heath Melton, Senior Vice President of Master Planned Communities for The Howard Hughes Corporation, speaks highly of these area communities: “When living in The Woodlands, Bridgeland or The Woodlands Hills, it is immediately noticeable that every factor – from the extended trail networks to the ample model home options – has been taken into consideration to give our residents the absolute best living environment. While we are immensely proud of our work and these awards, our work isn’t finished. We have many exciting additions on the horizon that will ensure these communities’ continued success.”

Bridgeland is an 11,400-acre master planned community located in Cypress, Texas, consistently ranked one of the top-selling master planned communities in Texas throughout its 12-year history. The award-winning development offers a wide variety of housing options and extensive outdoor amenities, with a strong emphasis on conserving and enhancing the natural environment. Bridgeland has over 3,000 acres dedicated to lakes, trails and parks, and offers a resort-style pool, disc-golf course, stocked lakes and complimentary use of kayaks, paddle boats and other recreational equipment for residents. Lakeland Village Center, now open, is the first of four retail centers in Bridgeland, with additional plans for a future Town Center along Grand Parkway/Highway 99, which intersects the community. Bridgeland is a development of The Howard Hughes Corporation managed by The Woodlands Development Company.

The Howard Hughes Corporation owns, manages and develops commercial, residential and mixed-use real estate throughout the U.S. Its award-winning assets include the country’s preeminent portfolio of master planned communities, as well as operating properties and development opportunities including: the Seaport District in New York; Columbia, Maryland; The Woodlands, The Woodlands Hills, and Bridgeland in the Greater Houston, Texas area; Summerlin, Las Vegas; and Ward Village in Honolulu, Hawaii. The Howard Hughes Corporation’s portfolio is strategically positioned to meet and accelerate development based on market demand, resulting in one of the strongest real estate platforms in the country. Dedicated to innovative placemaking, the company is recognized for its ongoing commitment to design excellence and to the cultural life of its communities.