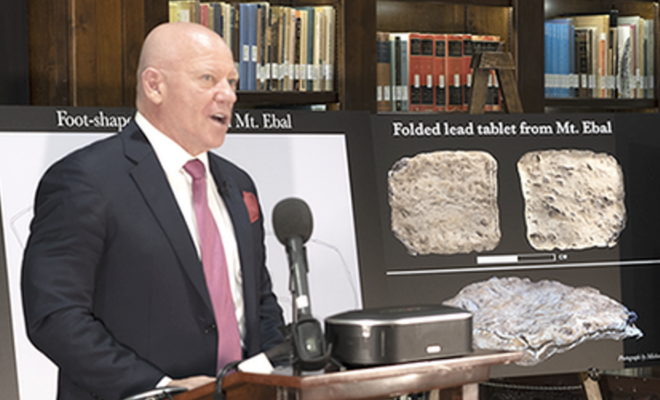 Dr. Scott Stripling and the Associates for Biblical Research (ABR) held a press conference at Houston’s Lanier Library on Thursday, March 24, announcing the discovery of a tiny folded piece of lead, inscribed with letters that pre-date a formal Hebrew alphabet.  Scarcely the size of a postage stamp, the piece was unearthed near Israel’s Mount Ebal in 2019. According to the Times of Israel, the tablet may be one of the greatest archaeological discoveries ever.  Stripling is the Director of the Archaeological Studies Institute at The Bible Seminary in Katy, and heads ABR’s excavation project at ancient Shiloh.

If further study confirms authenticity, the tablet would be the first written use of the name of God in Israel. It would “set the clock back on proven Israelite literacy by several centuries, showing that the Israelites were literate when they entered the Holy Land,” according to the Times article.  If all goes as planned in the upcoming peer review, it could mean that the Israelites wrote the Bible as it happened instead of relying on memory.

The lead object, in Latin called a defixio, is a small tablet inscribed with characters in the earliest form of Hebrew writing.  Stripling and his team were working in an area about 30 miles north of Jerusalem, specifically “Joshua’s Altar” on Mount Ebal, where they found the defixio by using a secondary processing technique called “wet sifting.” Preliminary evaluations lead researchers to believe the defixio dates to the Late Bronze Age II period, around 1400 – 1200 BC, and it is “centuries older than any known Hebrew inscription from ancient Israel,” according to ABR. A team of four scientists in Prague worked to recover the text. Then, Gershon Galil from Israel and Pieter van der Veen from Germany collaborated with Stripling to interpret the ancient, proto-alphabetic text, which is a process known as epigraphy.  According to these experts, the tablet speaks of curses and being cursed by God.  A more formal article, complete with peer review, is promised later this year.

For the lay person, what is the takeaway? This discovery could provide evidence that the people of Israel were, in fact, literate when they entered the land of Canaan, as the Hebrew Bible/Old Testament tells in the book of Deuteronomy.  In addition, it gives confirmation to the words written in Deuteronomy 11:29: “When the Lord your God brings you into the land and helps you take possession of it, you must pronounce the blessing at Mount Gerizim and the curse at Mount Ebal.” And from Joshua 8:30-31: “Then Joshua built an altar to the Lord, the God of Israel, on Mount Ebal.  He followed the commands that Moses, the Lord’s servant, had written.”

To explore the details of the discovery in more depth, see this article from one of the oldest newspapers in Israel.

Beyond the excitement of the defixio, March has been a busy month for Stripling, for ABR and for The Bible Seminary in Katy.  At the beginning of the month, the seminary opened a new exhibit, called “Joshua, Judges and Jesus.”  Stripling and his archaeology dig team have not been able to travel to Israel during the past two years because of the pandemic. Instead, Stripling says, “The Bible Seminary has brought Israel to Texas.”

The exhibit focuses on the ancient fortification of Ai, long an important crossroads in Hebrew culture. On display are over 170 artifacts collected at the excavation site, Khirbet el-Maqatir, which the ABR team and Stripling believe to be the city of Ai. According to their research, this is the ancient fortress city mentioned in the Old Testament book of Joshua, chapters 7 and 8, as well as in the book of Judges.  Ai was burned when it was conquered about 1400 BC, and the team found evidence of burned materials at the excavation site. Later civilization built back on top of the prior site, and it was then called Ephraim in the New Testament book of John 11:54.

But why “Joshua, Judges and Jesus?”  By continuing to dig at the site, the ABR teams have found objects that date to these very different time periods in the same location.  According to Jordan McClinton, co-director with Stripling of the exhibit, as the dig goes deeper, you go further back in time. “The science of archaeology bears witness to the Word of God; it brings glory to God,” he said.  For McClinton, the exhibit is not only a collection of compelling artifacts – it is the capstone project to his current graduate program.

Items in the exhibit include lamps from different time periods, a Greek parchment fragment, pieces of alabaster, an infant burial jar, offering vessels, socket stones to the gate of the fortress (which date to 1500 – 1400 BC), a stone engraved map depicting the town of Ephraim, which is the first such map ever excavated.  Among an assortment of coins is one issued by Pontius Pilate in 29 AD.  In addition, there is a small scarab which dates to Egypt’s 18th dynasty in the reign of Amenhotep II, the likely pharaoh of the exodus.  Christianity Today recognized this scarab as the top archaeological find in Israel in 2013, because it proved the occupation of Khirbet el-Maqatir in 1406 BC.  Seminary graduate Destry Jackson excavated the scarab on one of the ABR team’s dig projects.

The exhibit is open to the public through the end of 2022.  For more information, please see www.TheBibleSeminary.edu/3j

For Stripling, who also serves on the board of directors for the Near East Archaeological Society, both the discovery of the defixio and the newly-launched exhibit could be seen as an affirmation of the body of work he has accomplished over 30 years, working in close partnership with Israel’s Department of Antiquities.  Through ABR, he has led teams over the years that have worked in a number of dig sites in Israel. He has written several books, including The Trowel and the Truth, The Power of Covenant in Times of Crisis, and co-authored The Exodus: Historicity, Chronology and Theological Implications, as well as numerous scholarly articles.