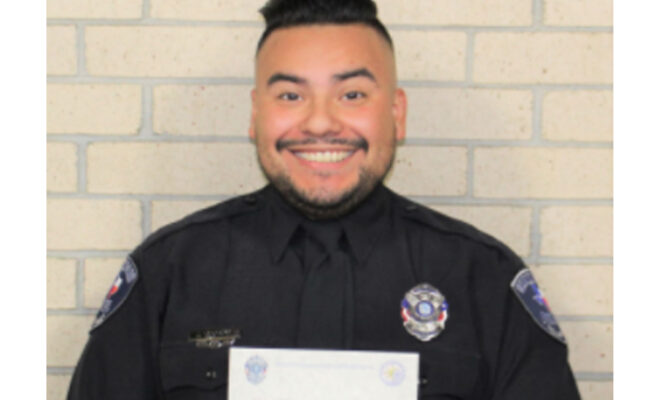 SHENANDOAH, TX – The Shenandoah Police Department was recognized for their efforts in the fight against DWI offenses even though  Mothers Against Drunk Driving (MADD) were unable to hold their 2020 “Take The Wheel Law Enforcement Award and Recognition Event for Harris and Montgomery Counties” due to the pandemic.

The annual event recognizes officers, departments and agencies for their efforts to reduce the number of drunk and drugged motorists on Houston area roads. Each agency submits the name of their officer with the highest number of DWI cases during the previous year, highlighting their impact in the fight to prevent needless accidents and deaths caused by impaired drivers.

Shenandoah Officer Jeremiah Ledesma was recently recognized for his DWI arrest record at Shenandoah PD for the year 2019. He was presented his award at the October 14 Shenandoah City Council meeting by Lieutenant Jake Reuvers and Chief Troye Dunlap. Ledesma is currently assigned to patrol under Sgt. Justin Atherton. Ledesma was raised in Central Texas and is currently attending Sam Houston State University where he will be graduating soon with a degree in Criminal Justice.  He joined the Shenandoah Police Department in January 2018.

While at the podium receiving accolades for his DWI work, Ledesma was also presented with a Chief of Police Letter of Commendation for an incident in September of this year.

“While working an extra job, Officer Ledesma became aware of a man collapsed in the parking lot,” said Dunlap. “He found the man to be non-responsive, called EMS and began performing CPR. He continued the compressions until an EMS crew arrived and took over the efforts. The man left the scene with a pulse and survived. It is very possible that the quick thinking and actions of Ledesma saved the man’s life.”

Ledesma was joined at the meeting by his wife, daughter, members of his family, friends and coworkers. City Council and those in attendance gave him a standing ovation for both awards presented.