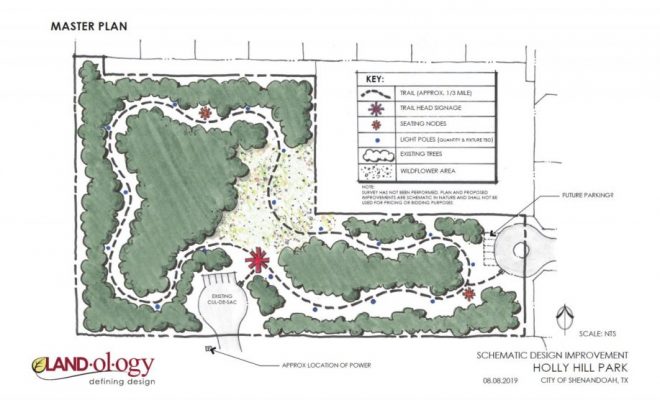 SHENANDOAH, TX – Approximately 35 people attended the October 2 Fall Town Hall focusing on the proposed Holly Hill Park. The park was originally discussed in the 2018-19 budget workshops. In February 2019 the city surveyed residents about parks. Information about the survey questions can be found at hellowoodlands.com/shenandoah-conducting-survey-for-input-on-new-park/.

Approximately 200 residents responded to the survey which was later presented to Council and was one of the topics of the May Town Hall, information about which can be found at hellowoodlands.com/shenandoah-holds-town-hall-on-park-community-room/.

In the survey, 73% wanted a new park; 53% supported a walking park concept. Of the responses, 34% supported a budget of $50,000-100,000 while 40% supported a budget over $100,000. Staff took the responses and had preliminary renderings made of the park and identified components and respective costs. Council directed staff to bring the model and costs to the residents at a town hall to receive more comments and direction.

Mayor Ritch Wheeler and all five councilmembers were in attendance to hear comments. Mayor Wheeler told the attendees that Council was “literally gathering feedback” through the town hall. Councilmember Mike McLeod commented that it was an opportunity for the community to share ideas and work for the good of Shenandoah.

Public Works Director Joseph Peart moderated the town hall, leading attendees through a history of the proposed Holly Hill Park. He then presented a powerpoint covering components and projected costs which could run to over $500,000 depending on chosen options. The presentation is available at shenandoahtx.us/DocumentCenter/View/2370.