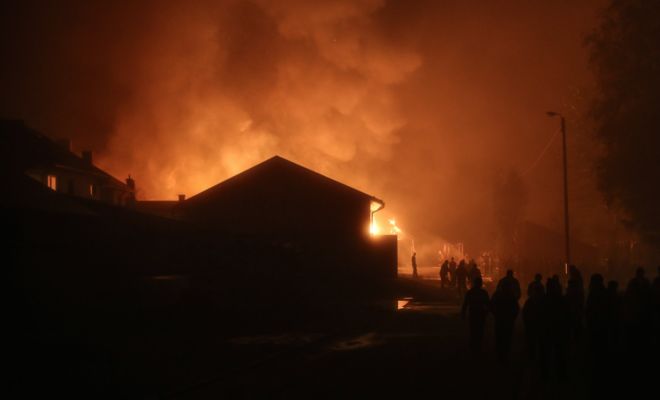 An early morning fire in southern Montgomery County has claimed the lives of two brothers and their sister, ages 5-13, and left their 10 year old brother, their Grandfather and an Uncle seriously injured. In total 8 members of an extended family were asleep when fire broke out on the second floor of their brick home located in the 19000 block of Johnson Rd, near Tamina. Most of the family was asleep on the second floor when fire broke out and were initially trapped by the flames. According to the surviving family members, homeowner Bobby Johnson broke out a second floor window and was able to get most of the family out, but they were unable to get through the flames to reach the children trapped in their bedroom on the other side of the second floor.

Neighbors began calling 911 at 4:19 AM and several police officers were among the first to arrive, reporting that the second floor of the home was on fire. Two Officers from the City of Shenandoah entered the home, accompanied by an Officer from the City of Oak Ridge North and a Montgomery County Sheriffs Deputy. The Officers attempted to climb the stairs to the second floor but were driven back by smoke and flames. The two Shenandoah Officers and the Oak Ridge North Officer were injured, suffering smoke inhalation and lacerations. All three were transported to the hospital, where they were treated and are expected to fully recover.

During the rescue attempts, the homeowner and Grandfather to the children, Bobby Johnson and the children’s Uncle, Jarvis Johnson received inhalation injuries and burns. They were able to rescue one child, 10 year old Adrian Mitchell, but Adrian was seriously injured as well. A total of 5 Montgomery County Hospital District Ambulances transported the injured to hospitals, both in The Woodlands and in the Houston Medical Center. The children’s mother was home at the time of the fire as well but is not reported to be injured. The children’s father is reported to be working out of state, but has been contacted by family members.

Needham firefighters arrived shortly after the Officers were forced to retreat from the home and were able to bring the fire under control, but not before most of the home was destroyed. MCFMO Fire Investigators were called to the scene and together with firefighters, began to search through the remains of the burned home. Crews were able to locate all three deceased children shortly after daylight and Justice of the Peace Edie Connelly was called to the scene. Judge Connelly ordered autopsies and the victims have been transported to the Montgomery County Forensic Center where those autopsies are expected to begin this afternoon.

MCFMO Fire Investigators requested and have received assistance from the Montgomery County Sheriff’s Office and Conroe ISD Police. Together Officers and Detectives have been working to piece together the events that have claimed the lives of these children and injured so many. MCFMO investigators also requested assistance from our Federal and local partners. Fire Investigators from the BATF and the Conroe Fire Department responded to the scene and area hospitals and are assisting in all facets of the investigation. It is too early ill the investigation to speculate on a cause, but interviews with surviving family members indicate that the home “was not equipped with smoke detectors.

For more updates and information on the injured Officers, please contact their agency representatives.