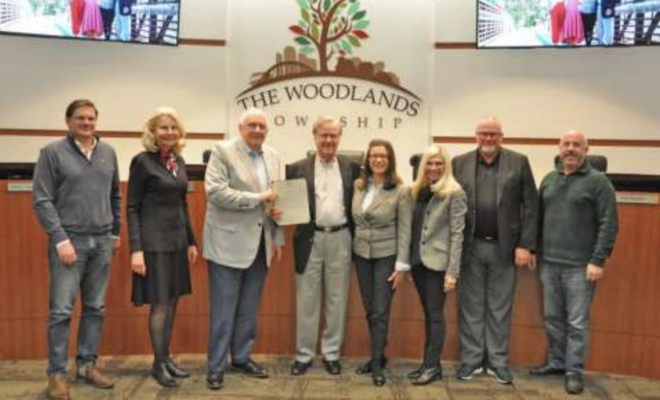 The first order of business was to recognize the award-winning Neighborhood Watch team. Interim President and General Manager Monique Sharp announced that The Woodlands Township has earned First Place in Category #2 for Populations 100,000 to 300,000 from The National Association of Town Watch for its 2021 National Night Out Campaign. The campaign, produced by The Woodlands Neighborhood Services program, earned top honors through its creative programming and participation of Township residents and public safety agencies. A full release on the honor can be read through this link: https://www.thewoodlandstownship-tx.gov/CivicAlerts.aspx?AID=3612 .

The Board also honored Mr. Robert Heineman as he retires from an extensive career in The Woodlands. Mr. Heineman began working on The Woodlands when he was hired as an intern in 1971 by The Woodlands founder George P. Mitchell. He was later promoted to Vice President of Planning and Design, a position he held for 40 years. Mr. Heineman has been vital to the creation of almost every aspect of The Woodlands since its inception and helping shape it into one of the most successful master planned communities in the nation. His achievements include the master plan, the village and neighborhood designs, the environmental plan, the open space system, the mobility system, parks and pathways, and the Town Center, including the 1972 “napkin sketch” plan for a mixed-use downtown bisected by a transit corridor, which later became The Woodlands Waterway. He also served in leadership roles for the Development Standards Committee and has been honored with many awards through the years. View a presentation regarding Robert Heineman Day.

Following reports from Village Association representatives, the Board accepted or approved the following items on their consent agenda:

On the regular agenda, the Board: