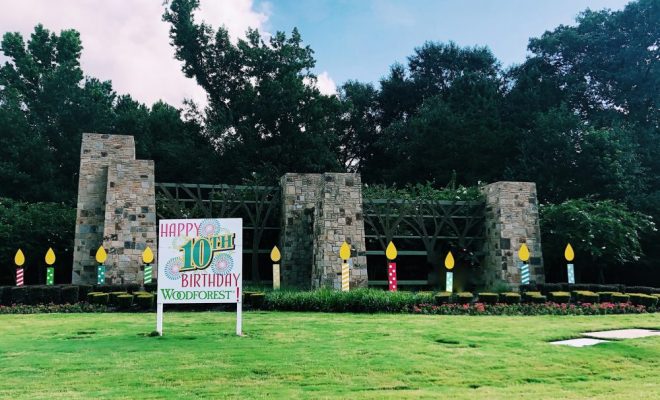 MONTGOMERY COUNTY, TX – It’s been 10 years of home sales for Woodforest, today one of the nation’s top-selling master-planned communities.

But in the beginning, Woodforest was more vision than reality. And some of the people who shared that vision are still there to see it come into focus.

“We were the first lot purchase in Woodforest, and moved into our home Oct. 1, 2009,” said Sarah Paul. “Ryan and I were the 13th and 14th residents to move in. Ten years later, we have never regretted our decision.”

Paul said that in the early days, Woodforest was just a couple of streets and a handful of homes. Now, residents enjoy an amenity center with two pools, tennis courts and a basketball court. Lily Pad Splash Park is nearby. Other parks can be found throughout the community, including a sports park, a fully accessible park and Admiral Bark Park, named after the Pauls’ dog.

“We imagined all of these things back then and to see it all falling into place over the years has been quite amazing,” Paul said. “Looking back on that leap of faith we took to put our savings into building a home in a new community, we can clearly see that God was calling us to this place.”

Another couple taking that leap of faith were Lane and Jessica Galloway who moved in shortly after the Pauls.

“It’s been great to see Woodforest grow over the last 10 years,” Lane said. “We knew plans were always there, but to see it come to fruition has been great and to witness it all come together.

“I can’t imagine a better place to live and grow with the families around you,” said Lane, who chose to remain in Woodforest when they purchased a new home several years ago.

Now, nearly 3,000 families call Woodforest home, and the community is hoping for more. During the month of July, anyone purchasing a home will be entered into a contest to win a free golf cart.

“We’re definitely a golf cart community,” said Virgil Yoakum, Vice President and General Manager of Woodforest. “You see people driving their golf cart to pick up pizza at Crust Pizza, head to a class at Rush Cycle or even in the CVS drive-thru.”

Next year, residents will be able to drive their golf carts to even more destinations within Woodforest when Pine Market opens, adding more shopping and dining to the growing community.

“It’s been a remarkable 10 years, but we’re not done yet,” Yoakum said. “There’s plenty of commercial and residential development remaining in Woodforest.”

Ranked No. 40 in a recently released list of the nation’s top-selling master-planned communities, Woodforest is located five miles north of The Woodlands and six miles south of Lake Conroe. Sixteen builders offer new homes priced from the $190,000s to the millions. Learn more at www.woodforesttx.com.