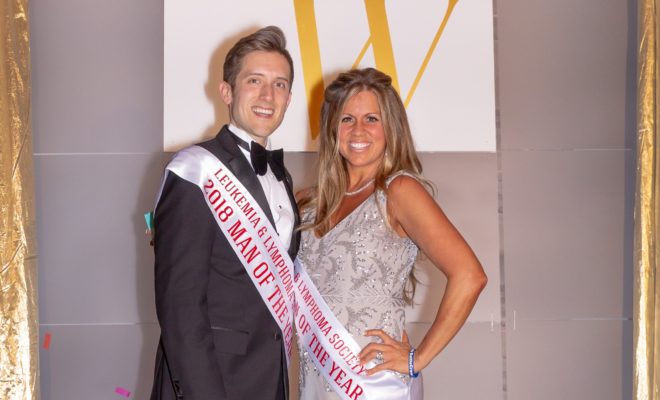 THE WOODLANDS, TX –  Winners of Montgomery County’s first ever Man & Woman of the Year competition benefiting the Leukemia & Lymphoma Society (LLS) have been announced.

The winners, Erin Cones of The Woodlands and Ian José Ramirez of Conroe, raised $120,000 and $40,000, respectively, to support LLS’s goal to find cures for blood cancers and ensure that patients have access to lifesaving treatments.

During a spirited 10-week fundraising period, candidates across the country competed in honor of a local boy or girl who is a blood cancer survivor to raise the most funds to ensure a world without blood cancers.

Candidates and their campaign teams were judged solely on fundraising success, each dollar counting as one vote. Their totals are then considered for the national title. Candidates in each LLS chapter across the country vie for the local title, and the highest fundraisers earn the title of National Man & Woman of the Year. The national titles, to be announced this summer, will be awarded to the top fundraisers in the country.

Erin Cones ran her campaign in honor of her son, Crew, who was diagnosed with acute lymphoblastic leukemia on July 3, 2015, when he was only 2 years old. ”This campaign is about a celebration,” she said. “In November, he will ring the (end of treatment) bell. I cannot think of anything better to preface his victory over blood cancer than this title. He has spent over half of his life battling leukemia and I want to show him that Im committed to helping others Kick Leukemia in the Face by raising awareness.”

Ian José Ramirez, a classically trained opera singer and general manager of Madera Estates Wedding & Events, dedicated his campaign to his late grandmother who suffered from leukemia and died before Ian was born. ”My grandmother is my connection to the arts and to the Leukemia & Lymphoma Society,” he said. “I thought perhaps the best way for me to do this campaign was to ‘raise my voice’ for blood cancer research.”

”Congratulations to our winners, and to all of our candidates and campaign team members who participated in Montgomery County’s inaugural Man & Woman of the Year campaign who collectively raised $480,000 in 10 short weeks,” said Mindy Reynolds, LLS Campaign Manager. “These exceptional volunteers are all passionate and determined individuals, and leaders in our community. Together, we are getting closer to LLS’s goal of a world without blood cancer.”

LLS is the worlds leading nonprofit voluntary health organization dedicated to finding cures for blood cancers and ensuring that patients have access to lifesaving treatments. Every nine minutes someone in the U.S. dies of a blood cancer. Through programs like Man & Woman of the Year, LLS has invested more than $1.2 billion in research to advance breakthrough therapies. In 2017 alone, the U.S. Food and Drug Administration (FDA) approved 18 therapies to treat patients with blood cancers, including some entirely new agents and some new uses for already approved drugs.

Visit the Man & Woman of the Year website at www.mwoy.org to learn how to become engaged with LLS.