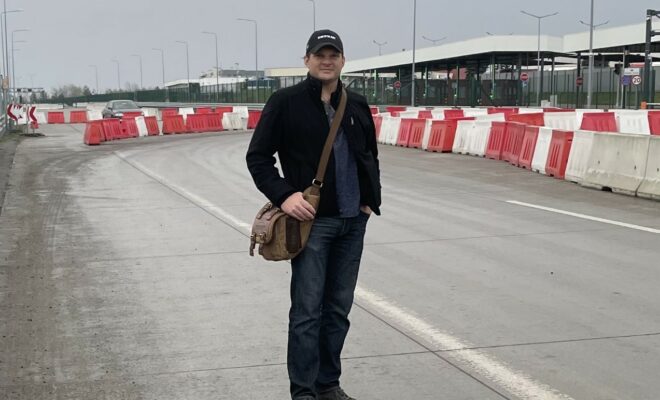 In late April 2022, Rev. Jason Nelson was called to travel from The Woodlands to directly help with the humanitarian crisis on the Ukraine-Poland border and minister to those in need. This is his story.

How was your trip?

Since returning from Poland and Ukraine, I have fielded this question many times and my immediate answer is always one word: intense.

What are the current living conditions like for tens of thousands of Ukrainian refugees sleeping on cots in abandoned warehouses and expo centers with little or no access to basic human essentials? Intense.

What’s it like logistically to shelter all those war displaced people who are stunned and stuck in a perpetual state of confusion and whose levels of despair and anxiety are rising as a result of facing an uncertain future? Intense.

How would you describe the emotional, psychological and spiritual pain resulting from diabolical acts of destruction and festering within families separated by distance or death? Intense.

From the moment I arrived to the moment I departed, my heart heard (even before translation) the intensity in the voices of the suffering as they shared their painful plight with me.

A Ukrainian mother described how she and her kids survived for weeks in a shelter within eastern Ukraine under Russian occupation by collecting rain water, unable to retreat out of fear of being gunned down by soldiers in the streets… their children watching babies born in crowded rooms and walking over the corpses of the deceased whose bodies were unable to be moved.

A sister explained how she and her younger brothers fled from their housing complex as Russian soldiers went door-to-door throwing hand grenades into the front rooms of people’s apartments to fulfill their scorched war ideology.

The friend of 70-year-old Ukrainian, Nadiya Trubchanikova, told of her escape from the Kyiv region when the Russian army occupied it. While the woman survived, the occupiers killed her son. For over a week, she was hitching from her village to Bucha to search for his body before finally finding it.

These are just a few glimpses into the gravity and reality of the situation for the Ukrainian people. I have many more stories recorded in my journal of greater intensity and even more seared into my memory and written on my heart. Perhaps, I will share them one day.

What I can say, though, is this: it was a privilege to help, support, listen to, cry alongside, and pray with the Ukrainian people. Given the opportunity, I would to back in a heartbeat.

But for now, they need my prayers and they need yours. Let’s make those prayers… intense.

Jason J. Nelson is an ordained elder in the Texas Annual Conference of the United Methodist Church, author of The Life of the Party, and serving on The Woodlands Township Board of Directors. He holds B.A., M.A., M.Ed., and M.Div. degrees from Trinity International University, Trinity Graduate School, Houston Baptist University, and Perkins School of Theology at Southern Methodist University. In the spring of 2021, Nelson was awarded an honorary doctor of divinity degree for his service to the church, commitment to his community, and contribution to the fields of theological and biblical studies. Nelson is a published author and is regularly invited to speak throughout the country. He is an advocate for education, mental health awareness, breast cancer research, and community/global assistance ministries. He and his family moved to The Woodlands in 2013. Learn more at jasonjnelson.com.