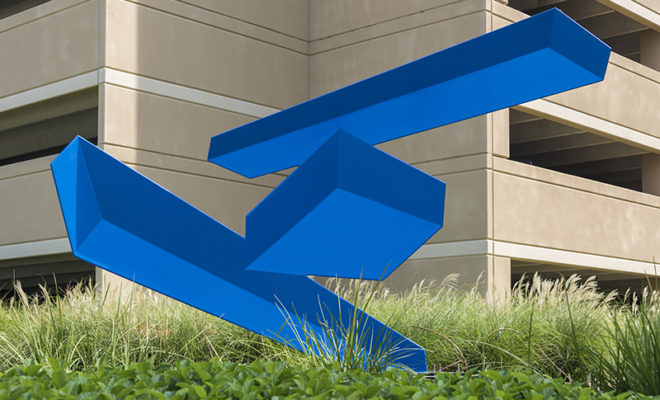 Rafael Barrios is a national and international award-winning artist. His sculpture Nimbus, a smaller piece similar to Acrobática, is situated in the lobby at The Westin at The Woodlands.

Constructed of stainless steel and acrylic lacquer, Acrobática is nine feet, six inches tall by 13 feet, four inches long by four feet wide, weighing 1,760 pounds. From a distance, the sculpture appears to be a composition of three-dimensional, solid rectangular shapes or cuboids, which are delicately balanced on one another. As one approaches the sculpture, the true shape of the sculpture is revealed as two-dimension flat plates with three very slight bends, which form shallow concave shapes. 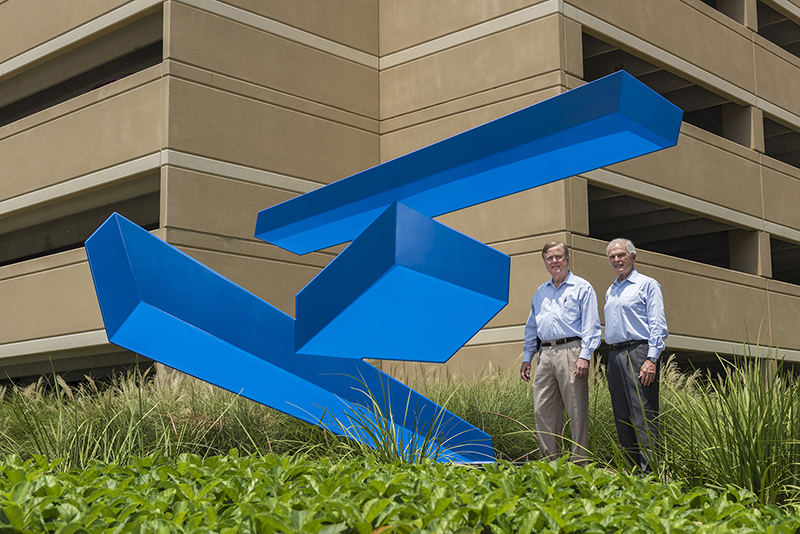 Robert Heineman (left), Vice President of Planning, and Peter Doyle (right), Executive Vice President of Strategic Development, both with The Howard Hughes Corporation, have orchestrated selections of the various sculpture pieces for Hughes Landing with the assistance of Kinzelman Art Consulting.

“Acrobática creates a mirage of images. As one walks by perpendicular to the sculpture, the shapes appear to move and rotate at the connections. These transformations are optical illusions that successfully engage the viewer and elevate the sculpture from pure art to include a bit of magic,” said Robert Heineman, Vice President of Planning for The Howard Hughes Corporation and Director of The Woodlands Art Fund.

Peter Doyle, Executive Vice President of Strategic Development for Howard Hughes Corporation, commented “Our vision for Hughes Landing is to simply add dramatic and beautiful pieces of art to this urban, walkable setting. Acrobática complements the contemporary outdoor sculptures currently in Hughes Landing and helps enhance the splendid pieces throughout The Woodlands.”

Acrobática is the sixth piece of public, outdoor art placed in Hughes Landing with the assistance of Kinzelman Art Consulting. Acrobática joins Wind Waves by Yvonne Domenge;  Dream.It.Do.It and Inter.nation.all.Waters by John Runnels; the Band Shell at Hughes Landing, which serves as a piece of art as well as a performance stage; Fenris Glacier, Karale Glacier and Midgard Glacier by Julie Speidel; and Firefly by John Clement.

With the installation of Acrobática, The Woodlands is home to 58 public, outdoor art pieces along with 14 art benches, installed near The Woodlands Waterway. Future art benches have been selected by The Woodlands Arts Council to be installed at Hughes Landing in late September as part of the Council’s art bench program in The Woodlands. This latest unveiling is emblematic of The Howard Hughes Corporation’s commitment to art and culture as integral components of expert placemaking.

The Howard Hughes Corporation owns, manages and develops commercial, residential and mixed-use real estate throughout the U.S. Dedicated to innovative placemaking, the company is recognized for its ongoing commitment to design excellence and to the cultural life of its communities. For additional information about The Howard Hughes Corporation, visit www.howardhughes.com.