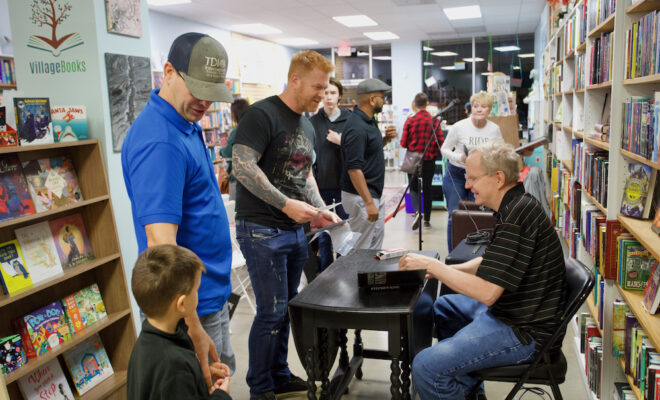 On the evening of Tuesday, October 18, 2022, local author Bev Vincent celebrated the launch of his book, Stephen King: A Complete Exploration of His Work, Life, and Influences, at Village Books in The Woodlands.

Vincent’s new Stephen King Ultimate Companion book is an expansion of the The Stephen King Illustrated Companion. Publisher becker&mayer! shared that, “readers will explore the evolution and influences of Stephen King’s body of work over his nearly 50-year career, and discover how the themes of his writing reflect the changing times and events within his life. Featuring archival photos and documents from King’s personal collection, this chronological history delves into the stories behind how his novels, novellas, short stories, and adaptations came to be.”

The timing of Vincent’s newest book celebrated Stephen King’s 75th birthday on September 21, 2022. Originally scheduled on the King of Horror’s birthday, the book launch was held on Tuesday, October 18 at Village Books in The Woodlands featured an Author Talk and Q & A followed by Bev Vincent signing books for attendees. During the Author Talk, Vincent shared his “Stephen King origin story” and how it all began when he picked up a copy of ‘Salem’s Lot at a used bookstore in 1979. Vincent shared his favorite books, memories, and experiences throughout the years as a Stephen King fan as well as his relationship with King himself, who Vincent described as a very generous man and supporter of upcoming authors.

Village Books, the community-focused independent bookstore in The Woodlands, is owned by Teresa Kenney and hosts book signings, a monthly book club, writing classes, and special events. Stop by the store to purchase Bev Vincents’s new book, Stephen King: A Complete Exploration of His Work, Life, and Influences, and learn more about Village Books and upcoming events at MyVillageBooks.com.