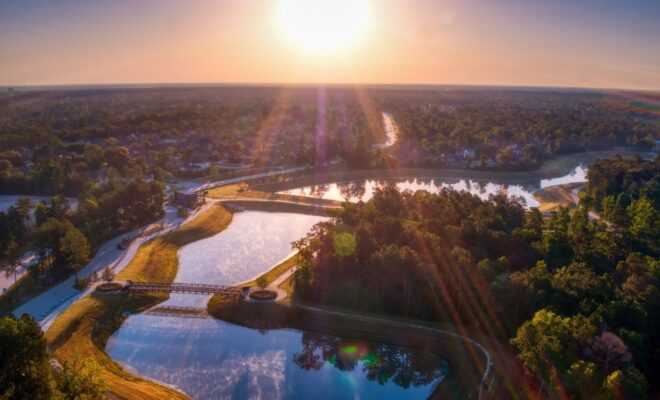 MONTGOMERY, TX – For the 10th year, Woodforest has been ranked among the nation’s top-selling master-planned communities, according to recently released reports.

“Our builders have consistently sold hundreds of homes each year, earning us a spot among the nation’s top-selling master-planned communities time and time again,” said Virgil Yoakum, Senior Vice President and General Manager of Woodforest. “Even in our 14th year, we are still achieving national notice. It’s something I’m quite proud of.”

A variety of available homes is a differentiating feature of master-planned communities, RCLCO says in its report, and something that has proven successful in Woodforest, Yoakum said.

“From the start, we have cultivated homes for just about every type of buyer,” he said. “We have custom homes, townhomes, villas, homes built for people age 55 and older, as well as single-family homes in a wide range of price points. This variety allows people to move up or move down in a home without leaving the community where they have put down roots.”

“We are nearing the end of active development, so we expect to see more limited options as the year goes on as we sell out of certain sections,” Yoakum said.

And even though the introduction of new neighborhoods in Woodforest is slowing, the Johnson Development community continues to debut new amenities. Coming this year is The Vue, a 5-acre recreation complex that will offer a pool, dog park, disc golf course, party barn and more. Also planned for this year is the Park at Pine Market, a gathering space for festivals, concerts, fitness classes and more in Woodforest’s commercial district.

Woodforest is located about seven miles west of Interstate 45 and approximately 5 miles north of The Woodlands. Learn more at www.woodforesttx.com.

Woodforest, a project of Johnson Development Corp., is a 3,000-acre master-planned community surrounding Woodforest Golf Club, one of the top-ranked daily-fee golf courses in the Houston area. The development offers a broad array of housing choices and prices — luxury homes, patio, townhomes, and custom homes priced from the $300,000s to more than $1 million — targeted to lifestyle-oriented buyers. Woodforest is slated for more than 5,000 homes and a full complement of amenities, retail and commercial properties. One of the nation’s top-selling master-planned communities, Woodforest is five miles north of The Woodlands and six miles south of Conroe. Convenient access just seven miles west of Interstate 45 is provided by Fish Creek Thoroughfare, a major north/south thoroughfare connecting Conroe in Montgomery County and Tomball in Harris County. For more information, visit www.woodforesttx.com or call 936.447.2800.