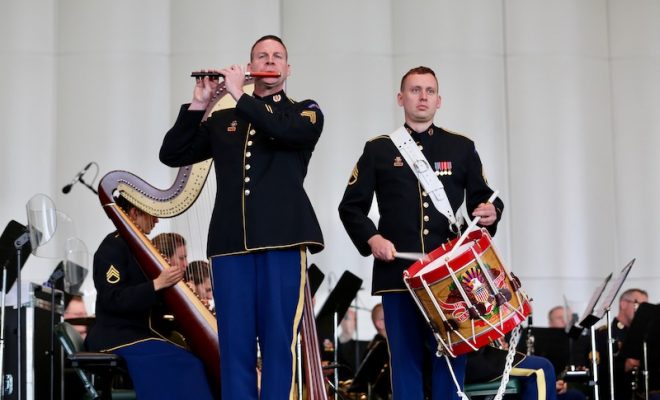 THE WOODLANDS, TX – The internationally acclaimed United States Army Field Band and Soldiers’ Chorus of Washington, DC continued its long tradition of presenting free public performances when it appeared at The Pavilion on Thursday, July 25 at 7:00 p.m.

The Concert Band & Soldiers’ Chorus are the oldest and largest of The U.S. Army Field Band’s performing components. Founded in 1946 and 1957 respectively, these two ensembles combine to present joint concerts on their national tours. They have performed in all 50 states and 30 foreign countries for audiences totaling hundreds of millions.

View photos taken by Hello Woodlands at the event on our Facebook Page here and below.

The 60-member Concert Band and 29-member Soldiers’ Chorus perform regularly in some of the most famous concert halls in the world, and just as often in the humblest auditoriums in the smallest of communities. The joining of these two ensembles allows them to offer unparalleled versatility of programming, ranging from orchestral masterworks and operatic arias to Sousa marches, jazz classics, and Broadway musicals. The band and chorus also perform independently, and have recently shared the stage with such ensembles as the Boston Pops, the Cincinnati Pops, the Detroit Symphony Orchestra, and the National Symphony Orchestra.

During pre-concert activities began at 6:00 p.m. Boy Scouts and Girl Scouts had the opportunity to complete their music merit badge through a variety of requirements set up throughout The Pavilion’s North Plaza. Scout Day is designed to provide an opportunity for scouts to earn their musical badge through attending a live concert and participating in fun, interactive activities that satisfy badge requirements. Scout Day was provided at no cost.

Opened in 1990, The Cynthia Woods Mitchell Pavilion is part of The Center for the Performing Arts at The Woodlands, a nonprofit 501 (c)(3) organization that provides diverse, high-quality performing arts events for the entertainment and enrichment of a broad regional audience. Through numerous educational and community outreach programs, The Pavilion is a catalyst for attracting new audiences to the performing arts and building strong ties between the arts and educational institutions.